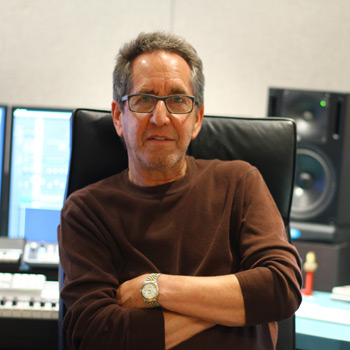 Bruce Miller is a native of Detroit, MI, where he cut his teeth on the local jazz and R&B scene as a guitarist and saxophonist in his teens. He was in strong demand for much of the professional music scene including local showrooms featuring major acts, records, commercials, jazz clubs and whatever else was happening around town relating to the music biz. It was a result of one of these show bands backing Paul Anka that Bruce found himself breaking out of Detroit to go out on the road with Anka as his guitarist.

Within the first year on the road, he was about to be drafted into the Army. This led him to audition for, and be accepted by, a military jazz band based in Colorado Springs, CO known as “The NORAD Commanders.” Bruce spent three years writing, and playing guitar and saxophone, in this prestigious multi-service ensemble, performing at venues throughout the US and Canada. After his military obligation was fulfilled, the next step was to get back with Paul Anka as his musical director, where he’d be living in New York and involved with Anka’s musical affairs, as well as conducting the orchestra. After his three years with Anka, Miller’s experience and musical abilities began to catch the ear of many notables in the industry whose encouragement brought him to the West Coast where he began working in Los Angeles.

“So much to say in praise of my friends at Audio Modeling. You very smart and talented pros have developed products that have no equals. So many sample libraries out there that all seem to do the same thing, with varying degrees of success. Then there are the Audio Modeling instruments that save me from stress AND job insecurity constantly. Just today, the solo violin and solo clarinet got me through a project that would have been impossible without your instruments. I use breath controller for ALL of your instruments and love that they are actually programmed for that use… not just hit and miss. This stuff is the best and YOU are the best!”

Bruce’s broad musical knowledge led him to doing orchestral arrangements for a long list of R&B artists including The Commodores, The Temptations, Rose Royce, and The Four Tops, as well as contemporary artists of today like Joss Stone and Rod Stewart. His first big break in scoring for television came when he was contacted by the composer for “Knots Landing.” Hiring Bruce to write an updated arrangement for the theme song, his new version won over the producers, who kept it for the rest of the series’ run, and eventually got him included in the composer roster for the show for the next five years. It was through this initial offering that he started to meet executives from Lorimar Studios, as well as many other notable producers. Obviously, they were impressed, as work came quickly for Miller, whose credits would include “Frasier,” “Becker,” “Designing Women,” “Wings,” “The (new) Odd Couple,” and two “Bonanza” movies of the week, to name just a few.

Bruce’s work with the Thomason’s (“Designing Women,” “Hearts Afire”) has continued throughout his television music career. It was through their close friendship with the First Family that Miller got involved with politics. The Democratic National Committee employed his musical talents for both Bill Clinton Presidential Campaigns, first in 1992 for a documentary called “A Man From Hope,” and in 1996 for another documentary entitled “A Place Called America.” In fact, “The Man from Hope” is credited as the media event with arguably the most impact that led to Clinton’s victory. He also scored the “Hillary 2000” film for Mrs Clinton’s NY Senate race, and “Legacy” for President Clinton’s farewell at the 2000 Democratic Convention.

Miller composed music for NBC’s hit show “Frasier”, which held an enviable reputation for its entire eleven year run. Hired by the show’s creators and producers, David Angell, Peter Casey and David Lee, Miller had been with the show since its inception in 1993. Fans of the show should note that it is Kelsey Grammer, himself, singing the end credit song, composed by Bruce and lyricist Darryl Phinnessee.

In June 1997, through Thomason, Bruce was brought on as Musical Director for the G8 Summit in Denver, CO. Started in 1975, the Summit is an annual conference where the great economic super powers of the world assemble to discuss affairs that affect the international community as a whole. The music program during the conference, “Saturday Night at the Summit,” featured Miller as arranger and conductor of the 45 member orchestra. Among the top talent performing that night were Chuck Berry, Lyle Lovett, Michael Bolton, Amy Grant, Eartha Kitt, Crystal Gayle, Jennifer Holiday, Sounds Of Blackness, and The Preservation Hall Jazz Band.

Bruce’s achievements have not gone unnoticed. He was nominated for an Emmy Award in 1989 for Best Arranger (Music Direction) for the Sammy Davis Jr. 60th Anniversary Celebration,” and he garnered a second nomination in 1994 for Best Theme for “Frasier.” In addition, he has sixteen BMI TV and Film awards and fourteen SESAC awards. In 2012, he was awarded the prestigious SESAC “Legacy” award. Miller also boasts various gold and platinum records for his work with numerous A-list recording artists across many genres.

These days, Bruce is as active as ever both composing and arranging. The biggest difference in his work today is that he often collaborates with his son Jason. Their professional relationship began when Bruce was hired by creator/executive producer Dave Hackel to score the CBS comedy “Becker.” The idea for an eclectic score and theme led Miller to suggesting a very hard-edged guitar solo over an urban, more sophisticated, stylized rhythm section. It seemed a perfect fit for Miller’s (then) twenty-year-old son Jason, to be the guitarist for this show. The producers heard a particular “rawness” from the original demo featuring Jason, that ended up as the show’s signature sound. Since that first collaboration, the two Millers have worked together on numerous TV shows, commercials, records, and a recent project that remains a source of great pride: “Shoulders,” the documentary defining the relationship between 2016 Democratic Presidential candidate Hillary Clinton, and her mother, Dorothy Rodham. The film was released online during the end of the election cycle and quickly amassed millions of views, as it shined a spotlight on the incredible contributions made to society by some of the most iconic women in our history.