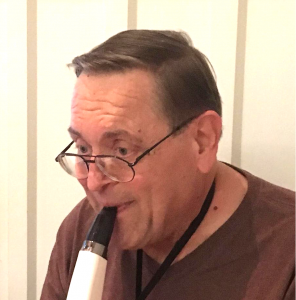 My steps into the realm of music began at age 10 years with the saxophone. Over the ensuing years I played in high school bands and received private tutoring in saxophone. In 1980 I graduated from Carthage College in Kenosha, Wisconsin with a bachelor’s degree in music and music education and a diploma in saxophone performance. After college I did instrument testing at Leblanc until 1991 and throughout this time and up to now, I have played with many bands, large and small, in various venue settings.

Significant musical highlights have included performing with the Temptations, Four Tops, Bobby Vinton and, most recently, my work with Audio Modeling.

My foray into electronic music began in the 1970’s using an instrument pickup and various amplifiers. In 1985 I began exploring MIDI technology using a Yamaha wx11. This was followed by the AKAI Electronic Wind Instrument (EWI) in 1995. In 2011 I incorporated the MUSE Receptor and created mp3 files using Band-in-a-Box. Shortly thereafter began my involvement beta testing for SWAM instruments. Most recently I have become involved in the Camelot program, both are produced by Audio Modeling. In early 2018 I began using the Roland Aerophone AE-10 wind controller which, along with the voices produced by SWAM instruments plus the support of Band-in-a-Box, Gig Performer and LANDR digital mastering programs, became the tools to enhance my performance project.

“The addition of the SWAM Instrument packages provided me with superior instrumental sounds in terms of quality, expressiveness and efficiency in their operation. They have truly been a godsend in what they do. It has been my great fortune to have had such a variety of musical experience and to have associated with a great many of exceptional musicians. It has truly been an honor.”