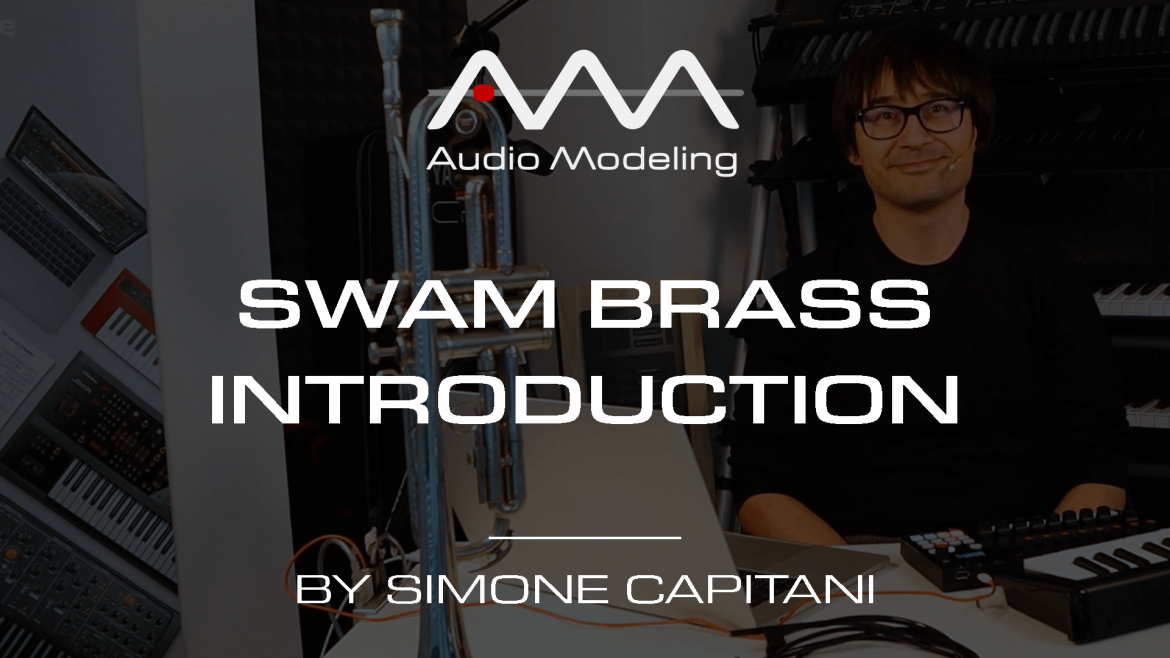 The first video from our latest SWAM Solo Brass playlist introduces you to the concept behind the creation of the most technologically virtual instruments on the market. Simone from Audio Modeling will guide you through the technology, vision and features of SWAM Brass Solo instruments and the exploration of the new user interface.

Just like all the other SWAM products, SWAM Brass too has been designed based on physical and behavioral modeling technology. That means that SWAM is not only a library or a collection of audio recordings from session musicians. It is a “living” digital instrument that generates sounds according to a specific algorithm, coded to follow behavioral rules.

This is quite an exciting journey, because it will reveal all the secrets that can make SWAM Brass your ultimate solution both in music productions and live performances. 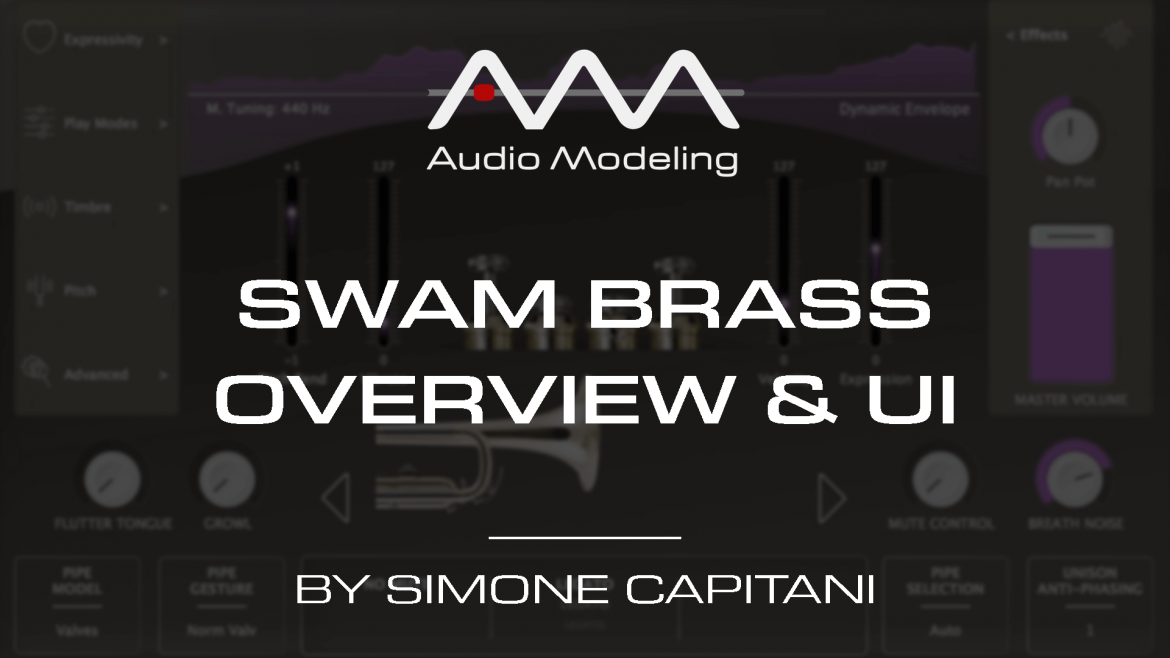 In the second video tutorial dedicated to SWAM Brass, Simone will help you find out more about the product and the importance that Audio Modeling has given to the User Experience.

Discover the different formats of SWAM Brass (standalone and Audio Unit plugin, VST, VST3, AAX) and explore the main screen to familiarize yourself with the interface. 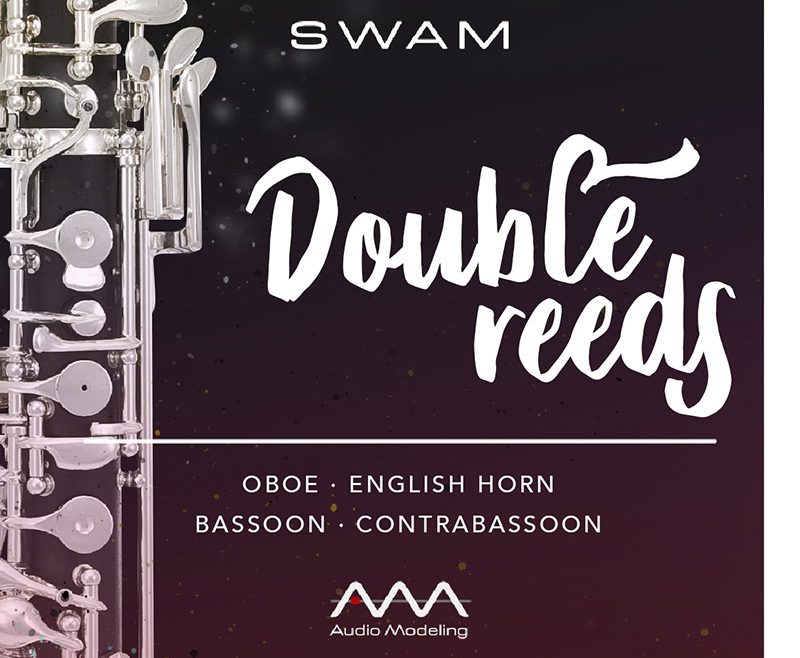 What can SWAM Double Reeds do once put to the test? Pretty much adapting to every single variable and nuance of a musical interpretation.

Take a look at the video made by digital entrepreneur and musician Doctor Mix and Stefano Lucato, CEO at Audiomodeling: one camera, one keyboard, unlimited potential. If you had to listen to the intro played by Lucato with your eyes closed, we are sure you’d be thinking that he’s playing a set of acoustic double reeds.

SWAM Double Reeds has a great range of expression between the staccato and the legato and is very easy and intuitive to use.

Not only this virtual instrument grants the widest range of musical nuances just by reacting according to the musician’s unique interpretation, but it can also be fully personalized: the player will customize their interpretation of a track by merely focusing on the note on velocity during their execution to control the sound attacks on staccatos and portamento speed on legatos.

This allows any musician to jam in real time  in the easiest and most musical  way, without key switches or complex DAW post production automations. 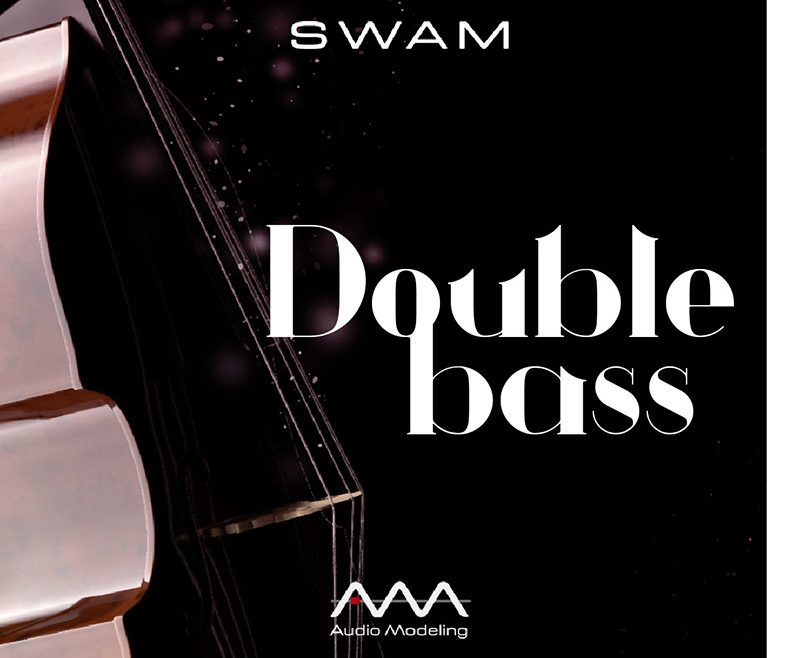 An expressive intro with so many variations and nuances that will leave you speechless introduces you to SWAM Double Bass: Stefano Lucato, musician and CEO at Audio Modeling, once again teams up with digital entrepreneur and pianist Doctor Mix to show you the virtually endless potential of the most evolved virtual instruments on the market.

The SWAM technology allows you to play pretty much any instrument you want simply via a keyboard and a pedal. Everything else is nothing but musical interpretation, as SWAM follows and adapts to the peculiarities of your style, delivering a unique auditory result every time.

And that’s not even the half of it: just by assigning the proper feature to the aftertouch, SWAM allows the musician to also play harmonics.

We are just scratching the surface: many expressive sound parameters can be assigned and controlled in real time: in this case the harmonics can be played by the keyboard aftertouch. 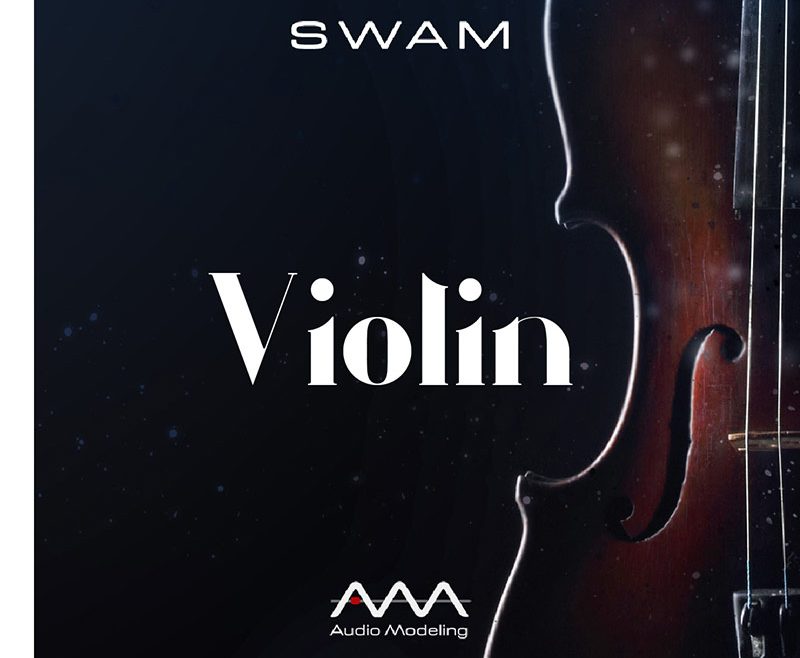 What is the potential of SWAM Violin? Virtually endless and flexible to the musician’s personal interpretation, talent, style and sensibility.

In less than two minutes, Stefano Lucato (musician and CEO at Audio Modeling) and pianist, music producer and digital entrepreneur Doctor Mix (Claudio Passavanti) will show you how versatile and evolved the new generation of virtual instruments by Audio Modeling can be.

Notice the subtle variation in the sounds and the flawless movements through different sound ranges: this is what SWAM Violin can and will do for a musician. And the widest range of expressions can be conveyed simply through a keyboard and a pedal.

Lucato explains how the “note-on” velocity influences the attack of the sound when playing Staccatos and the speed of the portamento when playing Legatos: high-velocity notes during legato notes allow a quick portamento; vice versa, a low-velocity note grants a slower portamento.

The Vibrato amount is controlled by the modulation wheel. The Expression pedal controls the Dynamic.

It is amazing the realism you can get with a common MIDI keyboard controller and a pedal! 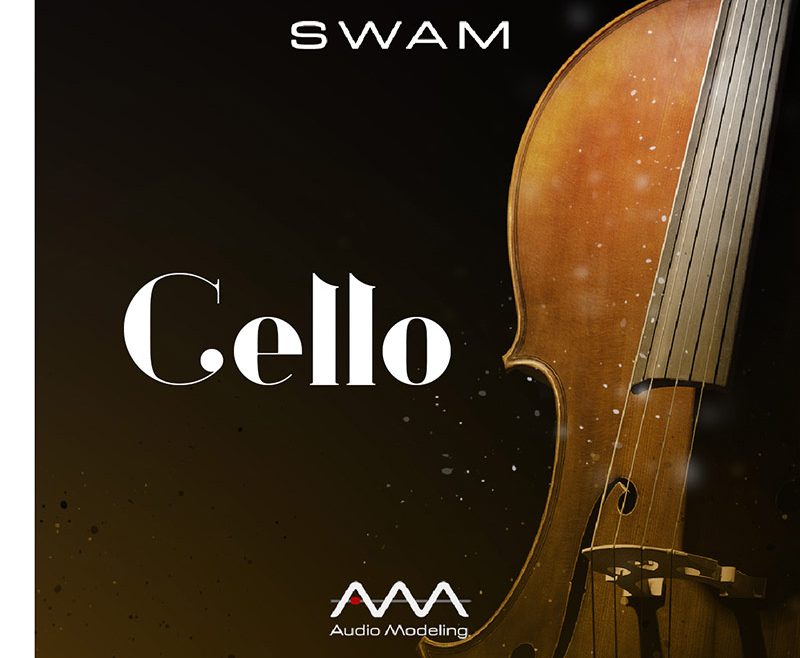 [VIDEO] SWAM Cello: so much more than a virtual instrument!

A keyboard, a pedal and a musician are the three crucial ingredients to allow SWAM Cello to sound precisely like a real instrument.

Lucato has previously explained how playing with the bow position, by moving it close to the neck or the bridge, can make a difference in the auditory result of an interpretation. The same principle applies to SWAM Cello as well, where the bow position can be assigned to a knob to always guarantee a constant, flawless control of every little nuance of your interpretation. 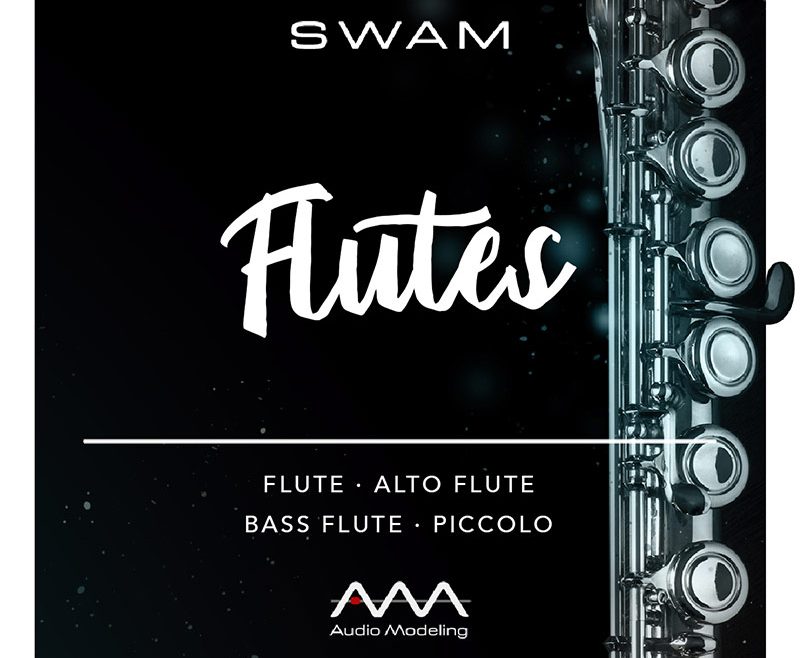 Digital entrepreneur, music producer and pianist Claudio Passavanti, also known as Doctor Mix, and Stefano Lucato – CEO at Audio Modeling – ready to introduce you to the potential of SWAM Flutes in this quick video tutorial.

The SWAM Flutes technology delivers a wide spectrum of sound results and hence several different styles, spanning from simple classical sounds to more elaborate and expressive results such as those typical of ethnic music.

One of the peculiarities of SWAM lies in its absolute simplicity of use. The interpretation and different sound variations don’t need any modifications on an interface level, as they all come from the way the musician plays the keyboard.

New-generation virtual instruments like SWAM focus completely on the player’s musical skills and taste which, in this case, fully expresses the characters and styles of the flutes. 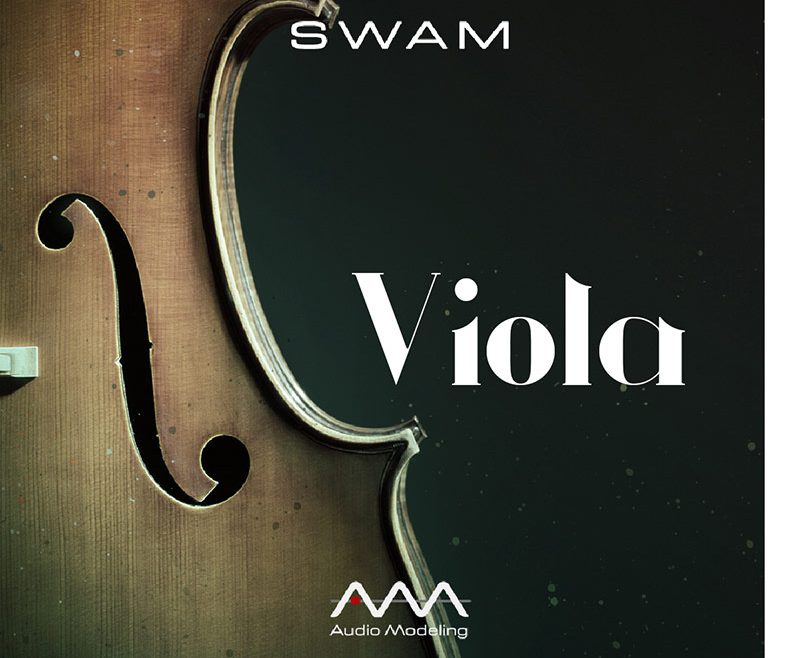 [VIDEO] SWAM Viola in action: Doctor Mix and Stefano Lucato are on it!

Stefano Lucato, CEO at Audio Modeling, and digital entrepreneur and music genius Doctor Mix are teaming up again to show you all the potential of SWAM Viola: so much more than a digital instrument!

In less than a minute and a half, and starting from a fascinating intro played by Lucato, you’ll have the chance to explore some of the features of the most evolved virtual viola on the market.

Close your eyes and listen: It sounds like a real instrument, doesn’t it?

That’s the potential of SWAM: creating a synergy with the musician’s personal interpretation, and not simply reproducing a sound.

Expression, portamento: by assigning MIDI to a knob, you can have all of that and so much more.

Here’s how a simple keyboard and pedal become all you need to play different styles and genres. 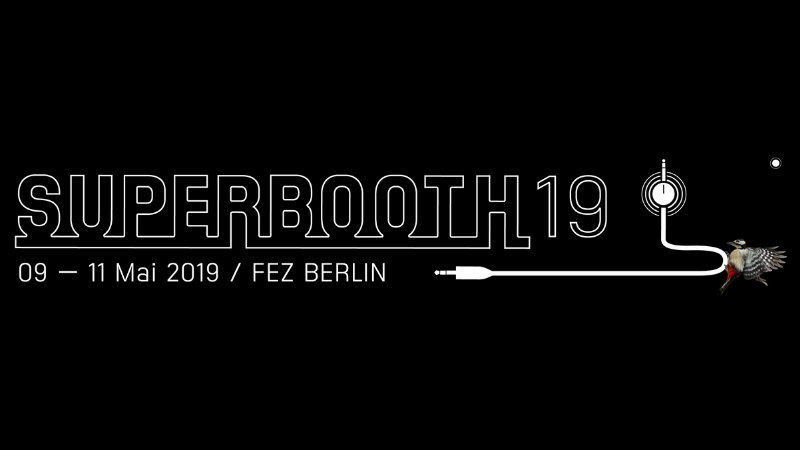 SUPERBOOTH is the first and the largest European trade fair for electronic musical instruments, giving you the opportunity to experience the latest innovations and rare instruments. At SUPERBOOTH19 the visitors get the chance to meet a large number of exhibitors from all over the world in an unparalleled atmosphere. In addition to the exhibition booth, there will be many daily concerts and live performances, workshops and talks taking place again.

You can meet us at:

Book an appointment with us! 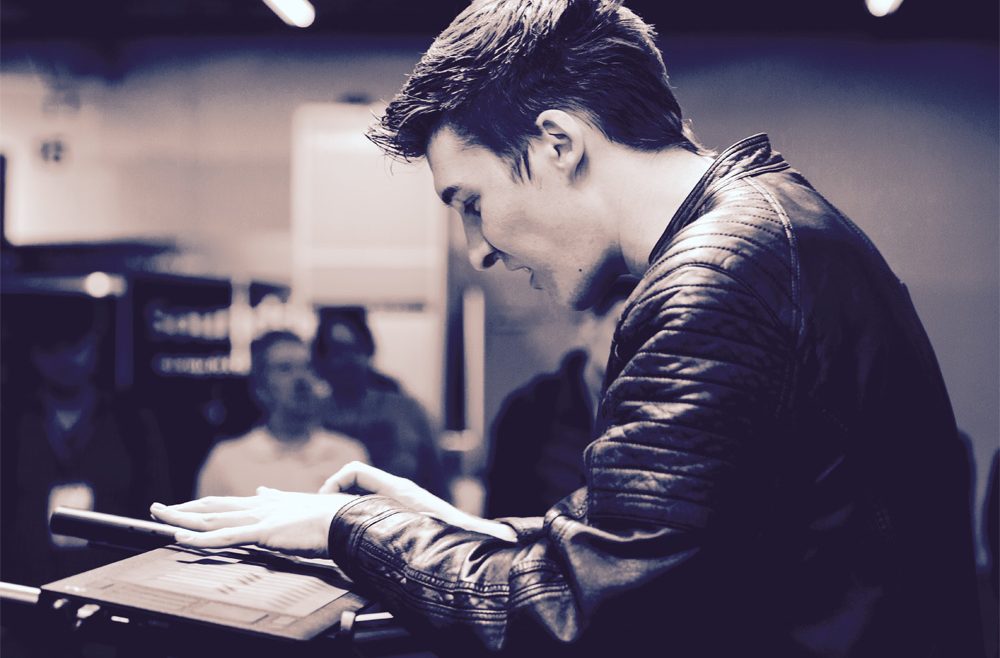 According to Gerald Peter, what you can do with Audio Modeling’s SWAM engine is simply “amazing”. The Vienna-native composer, producer and famous keyboardist states: “It allows you to make the different instruments like strings or breath-controlled instruments sounding so realistic, just from you playing the keyboard in real time. That’s really cool!”

The young talent – he was born in 1986 – first raised public awareness in the prog rock scene in 2013, with a deliciously conceptual album titled “Jeremias – Foreshadow of Forgotten Realms” by his 8-piece band Circle of Illusion. The album was the perfect medium to show Gerald’s extraordinary ability behind the keyboards, but also his noticeable skills as composer and producer.

Many noticed Peter’s extreme versatility and knack, to the point that “Jeremias – Foreshadow of Forgotten Realms” was listen on Jordan Rudess’ (keyboardist of Dream Theater) featured artist site and ranked on the 2013 top albums lists of several specialized music magazines, such progarchives.com, musicinbelgium.net, myglobalmind.com.

Peter’s achievements are many: from being on tour with the worldwide-renowned Cirque du Soleil – VOLTA to becoming a ROLI product specialist and active seaboard performer, from creating a variety of performance videoclips on YouTube to performing with the seaboard at the NAMM show in California, Musikmesse in Frankfurt, and at many other workshops and exhibitions all over Europe. More recently, in 2018, Gerald took part in the NAMM show with a live demonstration of the iOS instrument GeoShred on the iPhone in cooperation with moForte and Dream Theater’s Jordan Rudess.

But what about his latest work? Peter is out with an EP titled “Incremental Changes – Part One with The Gerald Peter Project”, the first part of a trilogy aimed to explore the combination of his skills in terms of performance, audio and video production, composition. A multi-layered work of art that fully displays the wide-ranging talent of this music professional.

Of course, SWAM couldn’t be anything but one of the most appropriate means to express such a multi-layered and complex approach to music.

Take a look at the recent interview Gerald gave to Stefano Lucato, CEO at Audio Modeling!