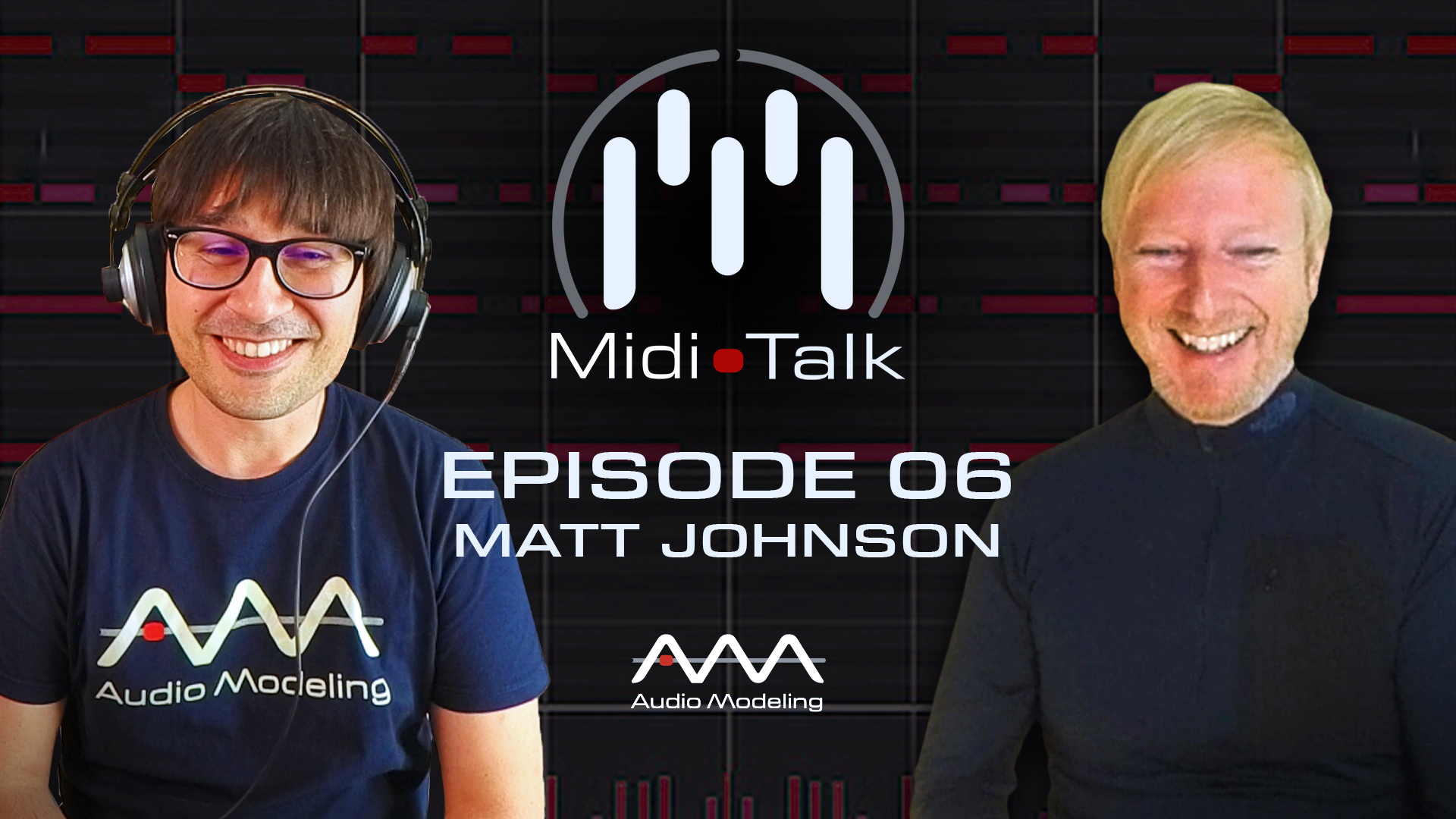 MIDI Talk Ep. 6 – The history and wisdom of Matt Johnson

Matt Johnson has spent nearly two decades in the band Jamiroquai. He sat down with Audio Modeling’s Simone Capitani and opened up about his background, the band, equipment, and how to be a professional musician. Read on to get the history and wisdom of a true road warrior and studio samurai.

From an early age, Matt Johnson seemed headed to a career playing music. “I started playing piano at about five years old. I played for a couple of years and sort of got bored with it.” Johnson chuckles at the irony, because, after turning next to trumpet and getting pretty good, synthesizers circled him back to the keys in the 1980s,. “When I became a teenager, I didn’t want to play classical music on the trumpet,” he recounts, “so I gravitated towards the keyboards, and by the time I was 17 or 18, that’s what I was doing for a living.” That decision proved fateful, as it led Johnson to his 19 year-long (and counting) tenure as keyboardist, songwriter, and producer for British jazz-funk stalwarts Jamiroquai.

Having been recommended to the band by former Jamiroquai guitarist Simon Katz, Johnson replaced founding keyboardist Toby Smith in 2002. His role in the band grew steadily, until 2017 found him co-writing and co-producing the band’s Automaton album with lead singer Jay Kay. Johnson also became Jamiroquai’s Musical Director on the road.

Producing Jamiroquai was a natural step for Johnson. “I’ve always gravitated towards production,” he says. Having started with an eight-track reel-to-reel tape recorder, Johnson now does his work in the box. “Pro Tools has become the thing for me; I really love Pro Tools,” he enthuses. “I love the fact that it very much is coming from an audio recorder perspective, rather than (being like) a sequencer. You can manipulate audio and be so intricate in how you treat it in Pro Tools.”

Of course, synthesizers also loom large in Johnson’s approach, both live and in the studio. “The last album with Jamiroquai was based around the Roland Jupiter 8 because we were bringing a bit of ‘80s sound into the mix, and that synth is really so nostalgic ‘80s.” Johnson reveals. “It’s got a beautiful crystalline sound. It doesn’t have a massive feature set, but you can get a huge range of sounds out of it, and it’s really big sounding. That was the centerpiece on the last album.

“Lately, I’ve really been getting into the Moog One. It’s such a stunning synth, and it’s so deep,” he continues. “I’m discovering more things all the time: the modulation possibilities, and the sequencer possibilities – you can have three sequences, all polyphonic with sixty-four steps, and you can change the filter or the resonance or almost anything on the synth, and then go in and craft it in fine detail. I’ve been disappearing down the rabbit hole of the Moog One,” concludes Johnson with a laugh.

From a sound design standpoint, as important as basic sound quality is to him, it is through dynamics that Johnson brings his synthesizer sounds to life, particularly in live performance. “A modern synth is as much a living, breathing instrument as a piano, the difference being that you can tailor (a synth) to your own playing a hundred percent,” Johnson explains. “Originally, synths were absolutely linear; they had no soul, and that was what was cool about them. It felt very futuristic, the fact that they didn’t care about what the velocity was (that you played). It was always the same. But now, synths can be very dynamic and whether you hit them soft or hard can affect the filter or whatever you determine it to affect.

“My playing is very based around dynamics,” he emphasizes. “I think dynamics are crucial in music if you want to make people feel something. The way that you hit a note, how hard or soft you hit it, can really affect the listener emotionally. It’s something I’ve been thinking about a lot lately: how the way you hit a note will make someone feel different. And it’s something we probably don’t think about enough as musicians.”

Programming dynamic sounds is only one aspect of bringing highly produced records to the stage, however. Going from studio to stage, says Johnson, “is a big transition to make.

“For instance, on the last Jamiroquai album: while I’m producing the album, I’m not thinking about how we’re going to recreate it. I wanted to make the best-sounding record by any means (possible). So then, at the end of it, you have to think about ‘how are we going to do this live?’

“I had taken some precautions. We’d used a lot of vintage synths, and any time we got a part that was like ‘Oh, that’s definitely going to make the record, that was really good,’ what I did was that I sampled the synth, note by note. Even some of these old vintage ones that didn’t have any MIDI or you couldn’t save the sound, I sampled it into Pro Tools and kept it. So I had all the really key sounds from the album. I have a Yamaha Montage 8, among some other keyboards, so I could sample the notes (into the Montage 8) and know that I had these sounds. In the past, I had to try and recreate them on another synth, and you can never quite get the same quality.

“Also on the last album, there was a lot more electronic elements that we’d had previously, because I’m really into electro stuff and I wanted to update the sound a little bit and bring a bit of that into the record. When it came to doing it live, it was a bit of a quandary, because the way Jay, the singer, likes to work, he doesn’t stick to an arrangement, he’ll come in when he feels like it, he might suddenly want to go to another chorus, or a solo or a breakdown. He’s almost a James Brown type of bandleader, so we couldn’t be slaved to a computer arrangement, we couldn’t just have a backing track running. I had to think about that. I spoke to a few people who were more into the tech side of things and they suggested getting someone on Ableton (Live) with Push. That turned out to be a perfect solution, because we could still have all the sequencer parts from the record that we wanted, put into Ableton, so if the arrangement changed, we had Howard (Whiddett) there, running Ableton, so he could change it on the fly, just as one of the band. For us, that was fantastic, because we’ve always been a live band and we don’t want to work with the computer (dictating performance), but we still had the option to have these electro elements and keep them absolutely live. The computer became a member of the band.”

Johnson has obviously learned a tremendous amount in the couple of decades he had spent touring and recording at the top of his field, and, when asked what advice he would offer young musicians, he has plenty to say. His main message is simple: just do it.

“It’s obviously very difficult at the moment (due to COVID),” he begins. “There’s nothing they can do but sit at home and write songs. But soon things will get back to normal and shows will start. My advice to young musicians is always: get out and play. Just get out and play as much as you can. It doesn’t matter what it is; it doesn’t matter if it’s to three old ladies down at the town hall. Just play, play, play, because that’s the only way you can build up your confidence and experience of being a performer.

“I’ve been in a few situations where I’ve worked with young artists who were 18 or 19, and suddenly they get a big record deal straightaway, but they’ve never gone out live. The first show they have to do is massive pressure, on the BBC or something, and, of course, it’s difficult for them. They can’t be great because they haven’t learned how to do that.

“You have to work hard at what you do. You might see musicians and think ‘Oh, they’re just geniuses. I could never be at that level.’ Of course, they weren’t like that at one point. They’re like that because they dedicated themselves to it and they kept trying harder and harder to get higher up. And it never stops; I’m still doing that now. I still try to improve my playing and learn all the time. You just have to try to be as good as the best in the world. That’s really hard, which means you have to try really hard.”

Even once a musician has worked hard enough to get really good at what they do, there is still another whole set of skills to master: that of the stage performer. Working in front of a live audience is its own set of challenges. What is the secret to that? “I think, personally, that the main thing is to be generous as an artist,” Johnson asserts. “There are some artists who, when they’re on, the audience almost feels nervous for them, because they’re just there in their own little world and they’re not really reaching out. The best artists are the ones that reach out to the audience. That means not thinking about yourself, but thinking about them – how to make them happy. Try to give out your energy to the crowd, because when you give it out to them, they send it back to you, and it becomes this sort of vortex, and that’s when you get that sort of ecstatic energy at gigs, people going nuts. It’s not just about the performer, it’s a relationship between the performer and the audience. Every time I get onstage, I’m just so grateful I can do a gig, and I make sure I give it my hundred percent, you know what I mean? I’m on it, I’m trying to give out energy the whole time.”

To hear Johnson talk about how the past reaches into the present, how influential the ‘80s were on his sound, how he sees the current information landscape for musicians, and more, watch his entire interview with Simone at: <link>.