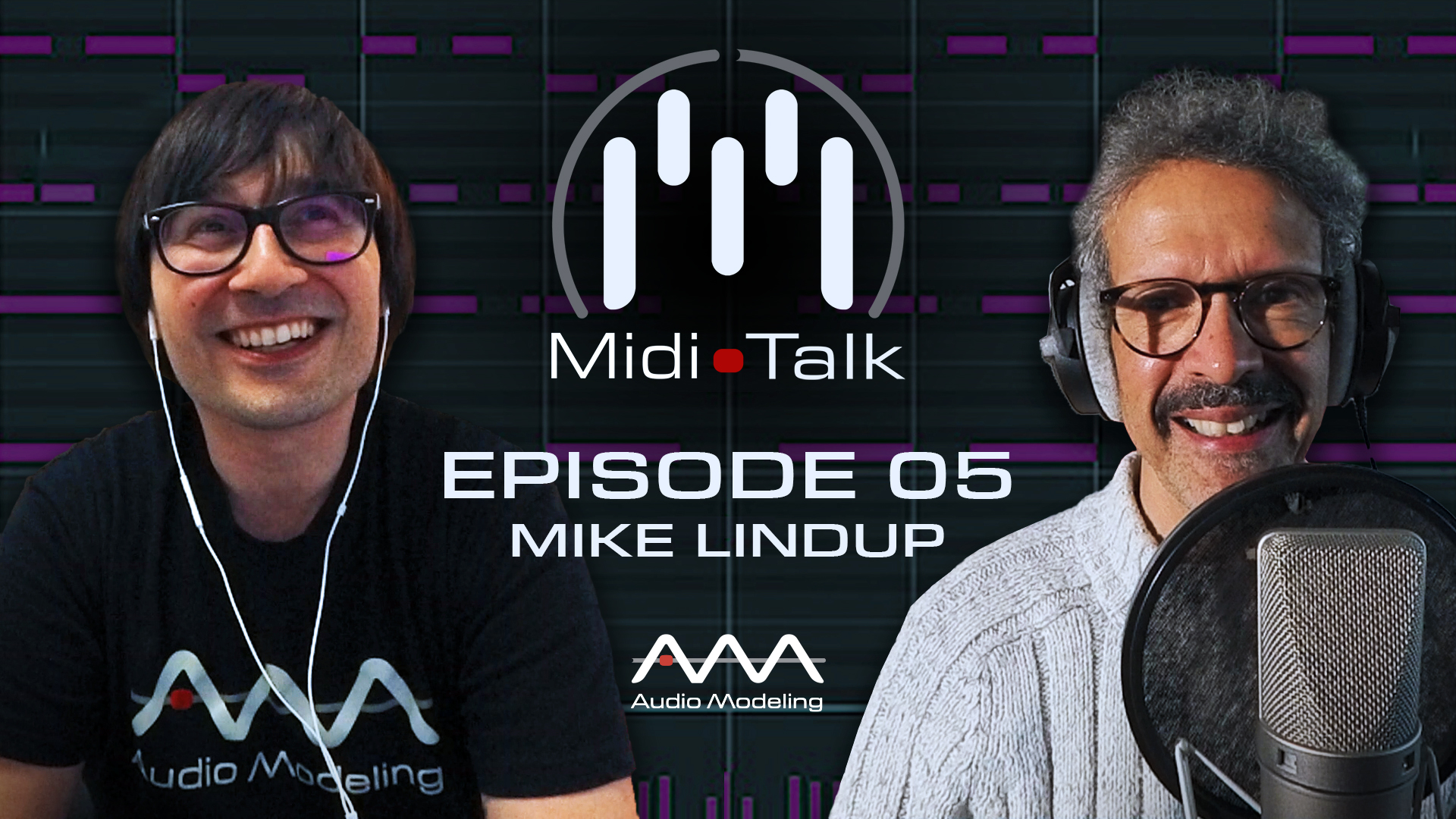 MIDI Talk is a podcast featuring Audio Modeling’s Simone Capitani in conversation with musicians and producers about intersections of music and technology.

In episode 5 of MIDI Talk, Simone Capitani catches up with Mike Lindup, keyboard player, singer, and founding member of Level 42.

Formed in London in 1979 as a jazz-funk band, Level 42 soon turned to writing songs and enjoyed a string of hits all through the 80s. Highly influential worldwide, the band reached its commercial peak when the song “Something About You”, released in 1985, reached number seven on the Billboard Hot 100 chart in the United States. The next year, their single “Lessons in Love” reached number three in the UK Singles Chart, and number 12 on the US Billboard Hot 100. Through changing personnel, breaking up, and reforming, Lindup not only continues working with Level 42 today, but along the way has delved into other musical genres and released two solo albums.

To the Music Born

With a singer-songwriter mother and a TV and film composer father, music has been an important part of Lindup’s life since infancy. Lindup spent his childhood immersed in a diverse spectrum of music from Miles Davis and Duke Ellington to Bob Dylan, Pete Seeger, Yehudi Menuhin, Tchaikovsky, and various soundtracks from British shows.

“Music was organically part of life in the house when I was growing up,” he remembers. “My Mum used to sing around the house, and sometimes she’d be rehearsing with a few musicians in the living room. Our living room was like my playground. There was an upright piano, a guitar, some hand drums… There was also a tape recorder, because mom sometimes used to record her rehearsals.”

Lindup started piano lessons at the age of six, and remembers hours spent at the piano recreating melodies and finding chords from songs he liked as a way to navigate the complex emotions of childhood. Teenage angst was handled similarly after his father bought him a drum kit. “I soon realized playing drums was great for processing angry feelings, which as a teenager I obviously had my share of,” he chuckles.

At 14, Lindup studied percussion, composition, and piano at Manchester’s Chethams School of Music, as well as singing in the school’s senior and chamber choirs. “Switching from piano to percussion was great,” he states, “because then I could play in the orchestra. Also, as a percussionist, I got to play on a bunch of different instruments.”

After graduation, Lindup entered London’s prestigious Guildhall School of Music & Drama as a percussionist. At Guildhall, he met Phil Gould, who then introduced him to Mark King and Gould’s brother Boon. From this core emerged Level 42 (and, yes, the name is a reference to The Hitchhiker’s Guide to the Galaxy).

Taking It To the Next Level

The band’s strong potential soon became clear. Phil and Boon’s older brother, John, was connected to Andy Sojka from Elite Records, who signed them. They recorded their first single, “Love Meeting Love,” while Lindup was still in college. The song was released in May 1980, Lindup finished college in July, and the band went straight into the studio to record what ended up being released as their second album, The Early Tapes.

“When ‘Love Meeting Love’ came out, we had no idea how it would be received,” Lindup comments. “We liked it, but we didn’t know how many other people would like it. We certainly weren’t thinking about a career, we just wanted to see what would happen with this.”

“Andy Sojka knew there was a slightly underground movement of jazz-funk happening in the UK at the time. He knew there were certain DJs playing this kind of music on the radio and in the clubs. There was a pretty big club scene and that became our first audience. Andy is the one who made that connection for us.”

“Then Polydor, our distributors for ‘Love Meeting Love’, started to take an interest in us. In those days, record companies were still looking for what was new: what are the new waves, who are the new bands in these waves, and so on. ”

“In 1981, we signed a five-year contract with the Polydor label,” continues Lindup. “It seems extraordinary, especially now with the way the music business is. But in fact, at the time it was pretty standard to sign a band and put them with a producer just to see if it would develop into something. They saw us and recognized some raw talent, but I mean, it was pretty raw. In reality, this gave us the opportunity to do a five-year apprenticeship. We wrote five albums in those five years.”

“We got to learn how to write songs because we were instrumentalists, not songwriters. Our musical influences were Mahavishnu Orchestra, Return to Forever, Miles Davis, and the whole ‘Bitches Brew’ diaspora: Herbie Hancock, Wayne Shorter, Joe Zawinul, Chick Corea, John McLaughlin, and so on. We didn’t know anything about songwriting until Andy told us ‘Make this into a song and you got a record deal’. It was a fantastic training opportunity.”

“At the same time, we learned how to become a live band,” Lindup reveals. “We could play our instruments quite well, but really putting on a show and making music that hits the audience is a different story. That’s especially true if you’ve been in the studio for a while, because sometimes, you can’t copy exactly what you did in the recordings; it doesn’t work live because the situation is different, the arrangements are different. We had all of that to learn and we were able to learn it because we had this sort of development time.”

Lindup is not shy about sharing the lessons in live performance Level 42 clearly learned quite well during that development time.

“Every time you go on stage, it’s a new challenge, even though you might know what you’re going to play,” he explains. “For example, at the beginning of a tour when the show is new, you don’t know exactly how it’ll be received. But you kind of need to have a mixture of self-confidence and trust that what you’re doing will be appreciated and not be put off by the voice in your head saying stuff like ‘Oh no, this is not going well’ or ‘this person is looking at their phone, which means they’re not enjoying it.’ You need to learn how to ignore these things going on in your mind.”

“At the same time, it’s important to be authentic. It’s OK to be vulnerable, and it’s OK to make mistakes. With experience, you kind of get used to the fact that most of the time, the audience is on your side, and they’re there because they just want to enjoy the evening. It’s no good trying to pretend everything is cool when it’s obviously not, because then, you’re not being genuine.”

Ah, but size matters, Lindup admits. “We had a huge lesson about performing when we did our first show in front of a big audience in 1981. Up until then, we’d been playing small clubs, up to about 300 people, around the UK, mostly in the jazz-funk scene. Then Miles Copeland (manager of The Police) got in touch with our manager, John Gould, and invited us to support The Police for eight shows in Germany. So we went from an audience of 300 to 8,000, which is a big jump. The very first show was almost a disaster.”

Of course, the band grew beyond these first challenges, as shown by the international success they enjoyed in the following years. But you know you’re curious about the near-disaster in that first show with The Police, aren’t you? Well, you can get all the juicy details, as well as hear Lindup’s perspective on technology and advice for getting started as a professional musician, by listening to the full episode 5 of MIDI Talk, .