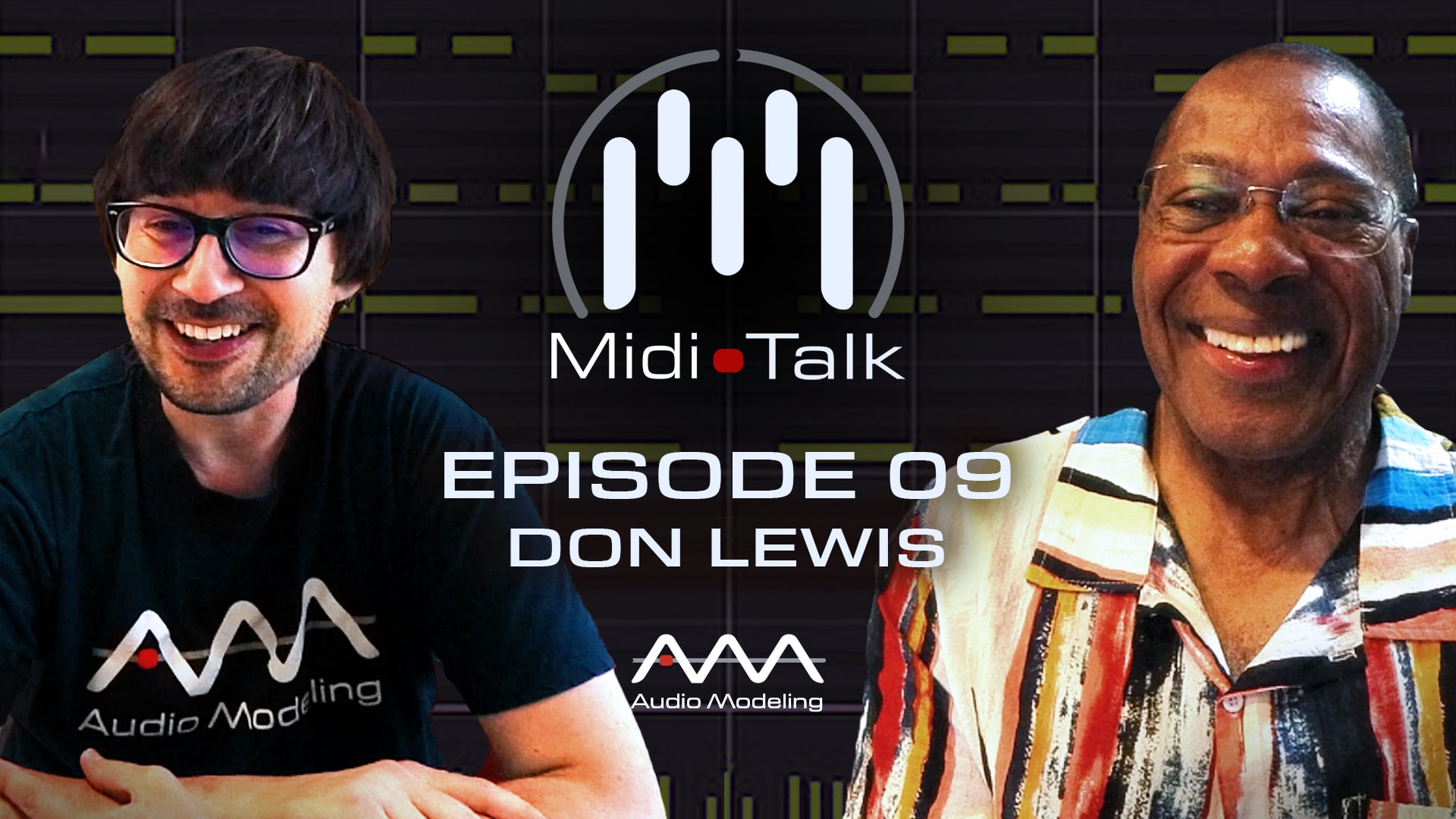 MIDI Talk 09 – Don Lewis: Living At the Corner of Humanity and Technology

It would be an understatement to say that Don Lewis is a legend of music technology because that would not begin to cover his innovations and their impact. Hailing from Dayton, Ohio, in the heartland of the US, Lewis became interested in music as a child watching a church organist, and in high school was introduced to electronics. When things would go wrong with the electropneumatic organ at his church, he would crawl up to the organ chamber and try to fix it. “I was very inquisitive,” Lewis states. “I think that is why we are here as human beings: to be inquisitive and explore.”

Lewis’s curious nature led him to study Electronic Engineering at Alabama’s historical Tuskegee Institute (now Tuskegee University), during which time he played at rallies led by Dr. Martin Luther King. From there, Lewis became a nuclear weapons specialist in the US Air Force, then did technical and musical jobs in Denver, Colorado, until he was able to become a musician full-time.

After moving to Los Angeles, Lewis worked with the likes of Quincy Jones, Michael Jackson, and Sergio Mendez, toured opening for the Beach Boys, and played the Newport Jazz Festival at Carnegie Hall.

In the late 1970s, most of a decade before the advent of MIDI, Lewis designed and built LEO (Live Electronic Orchestra), a system that integrated more than 16 synthesizers and processors in a live performance rig that took the phrase “one man band” to an entirely new level. So new, in fact, that it frightened the Musicians Union, who declared Lewis a “National Enemy” in the 1980s and worked to stop him from being able to perform. (Lewis notes that Michael Iceberg, a white musician also doing a solo electronic orchestra act at the time, never faced the opposition that Lewis, who is black, encountered.)

But Lewis kept innovating, digging into an entirely different role contributing to the design of new electronic musical instruments. A long, fruitful collaboration with RolandCorp’s Ikutaro Kakehashi brought Lewis’s influence to the design of numerous drum machines and rhythm units, including the iconic TR-808 and numerous synthesizer keyboards.

A conversation with Lewis, however, only occasionally touches on all of these accomplishments. Mostly, he weaves together philosophy, humanism, spiritual and cosmic aspects of musicmaking, and the application of all of those to technology to create an emotional experience for listeners. Audio Modeling’s Simone Capitani took the ride and followed Lewis to every corner of his universe in a discussion so wide-ranging we can only touch on a very limited portion of it here. But you can hear more by watching the video.

And now, ladies and gentlemen, the one and only Don Lewis.

The Wiggle and the Two Songs

Lewis views music as a fundamental ingredient of the human universe. “If we look at quantum physics, in string theory, there is a wiggle,” he begins. “Even if you can’t see (something) move, it is wiggling on some scale that is beyond nano. Working with sound and music is a very macro perspective of this nano thing that’s happening, but we can control the wiggle. That’s one way to look at why music and sound are so pervasive and so innate to our being – because we are working with something on a level that everything else is made out of.”

The art of music, then, lies in how we control the wiggle. Lewis poses a simple answer to how humans accomplish this, once again going to the foundations of existence.

“I have this feeling that every human being is musical. When you came into this world, you could sing two songs. What is a song? It is a sound and a language that someone else can understand.

“Before we learned our language – Italian, English – we sang two songs: the first, crying, the second song, laughter. We sang those songs before we could say ‘mama’ or ‘papa.’ We live our lives between those two songs: one of need, one of joy. We need each other to be joyful. When we are against each other, we are not joyful.”

“Conventional musical instruments are mechanical synthesizers. The voice is made up of three components of subtractive synthesis: the vocal cord is the oscillator, the mouth cavity is the filter, the envelope generator is the movement of the mouth,” describes Lewis.

“Looking at those ingredients tells you that, for the most part, this is why we have extended the range of the human voice through technology. Musical instruments extended the range: the bass is lower than any bass singer could sing, and the highs are higher than any soprano could sing. So, what we have done with mechanical synthesizers, we are now (doing with electronic instruments,) creating another palette of sound and color that extends it even more, and also articulates much more.

“But the articulation is the main ingredient of how you create emotion: that crying and that laughter. Those are the two emotions that get us – the crying and the laughter. How do you get those two emotions to be represented in the envelopes and the pitches and the filtering? How do you get Louis Armstrong’s and Joe Cocker’s and Janis Joplin’s and Aretha Franklin’s and Ray Charles’s voices, that emotion?“

The Delicate Sound of Thunder

Lewis does not limit himself to acoustic instruments and the voice in trying to generate emotion. “When we compose and when we sound design, we can pull from nature, the things external to us that still make sound: the wind, the rain, the thunder, the lightning.”

Lewis has long been captivated by thunder. “One of the most exciting things that would happen to me when I was a kid in Dayton, Ohio, especially in the summertime, there would be these afternoon thunderstorms, and everybody would go hide and get scared. Me, I’m sitting there looking at the lightning and going ‘Ooh, this is so cool.’ One Sunday, my grandfather and I were walking to church from our home, going to Sunday School. In the middle of us walking, a big thunderstorm started. There was this paper factory that had this really tall chimney all the way from the ground, it must have been 100 feet high. Lightning struck that chimney, and some bricks from that chimney fell. My grandfather went ‘whooo!’ and I went ‘Wow!’ These are things that prompted me to want to make this thunder (on a synthesizer),” relates Lewis.

“But the other thing was that, on Wendy Carlos’s Sonic Seasonings album, the ‘Spring’ episode had thunderstorms going on while this music was going on. I thought the Moog synthesizer was doing that. I was working with ARP, and I said, ‘Oh, I have to learn how to do this on the ARP.’ But I come to find out, it wasn’t the Moog, somebody recorded this and integrated it and mixed it in. So I did something for the first time: ARP thunder!”

The Importance of Intention

Don Lewis is a thinking man who has seen a lot, played a lot, and done a lot. When asked what advice he would give to young musicians working with technology, he pauses, then comes back with the wisdom he has gathered over his decades making music.

“What are you going to do with the music you produce with these tools? What is your intention? Are you going to be inspiring? Is there something you want to express? If it’s going to make a mark on anybody else’s life, do you have an intention here? If you can figure out what’s going inside of you that you think needs to be expressed, then use that tool for that. Otherwise, you will be distracted forever, because there are so many other ideas going on in the world.

I look at it this way: the first 20 years of your life (is spent) ingesting everything everybody else thinks you should have. Your education and the whole bit. The next 20 years, you try to put all of that stuff to work. Then you find out at the end of that 20 years – this is working or this is not working. And then the next 20 years, you try to erase all the things (from) the first 20 years that didn’t work for you. So, those first years are very susceptible to being ones of confusion, especially now.

You have to be not only about you, (but) about others, and when you become about others, you are actually being more about you. How would this make a difference not only in my life, but in others’ lives? Is my protest song actually going to help the movement? Or is it going to stop the movement? In the days of civil rights, the protest songs were songs, they were things that people could sing and march. They weren’t chanting, they were singing. The difference between chanting and singing is that chanting only takes in the left side of the brain, which is only speech. Singing takes in the musical side and the language side, the creative side and the logic side. And then you get more power and you get more people participating.

I know I would not be here if it had not been for my ancestors, who sang their way through slavery. They sang those work songs, they sang those spirituals, and that’s what helped them to survive. What helped our civil rights movement in the United States was the singing, the marching, Martin Luther King, John Lewis, and others. I met both of these people, I knew them. So I understand those rudiments, and I hope that the ability to access the creative efforts of (Audio Modeling) and others in making music accessible, can create this atmosphere; this is the atmosphere we need.

If music disappeared from the earth, the earth will continue, but our existence may not, if we don’t become in harmony, first, with ourselves. And that’s what music is all about.

Visit www.DonLewisLEO.com for more informations about Don Lewis and the new upcoming documentary about his life and career.