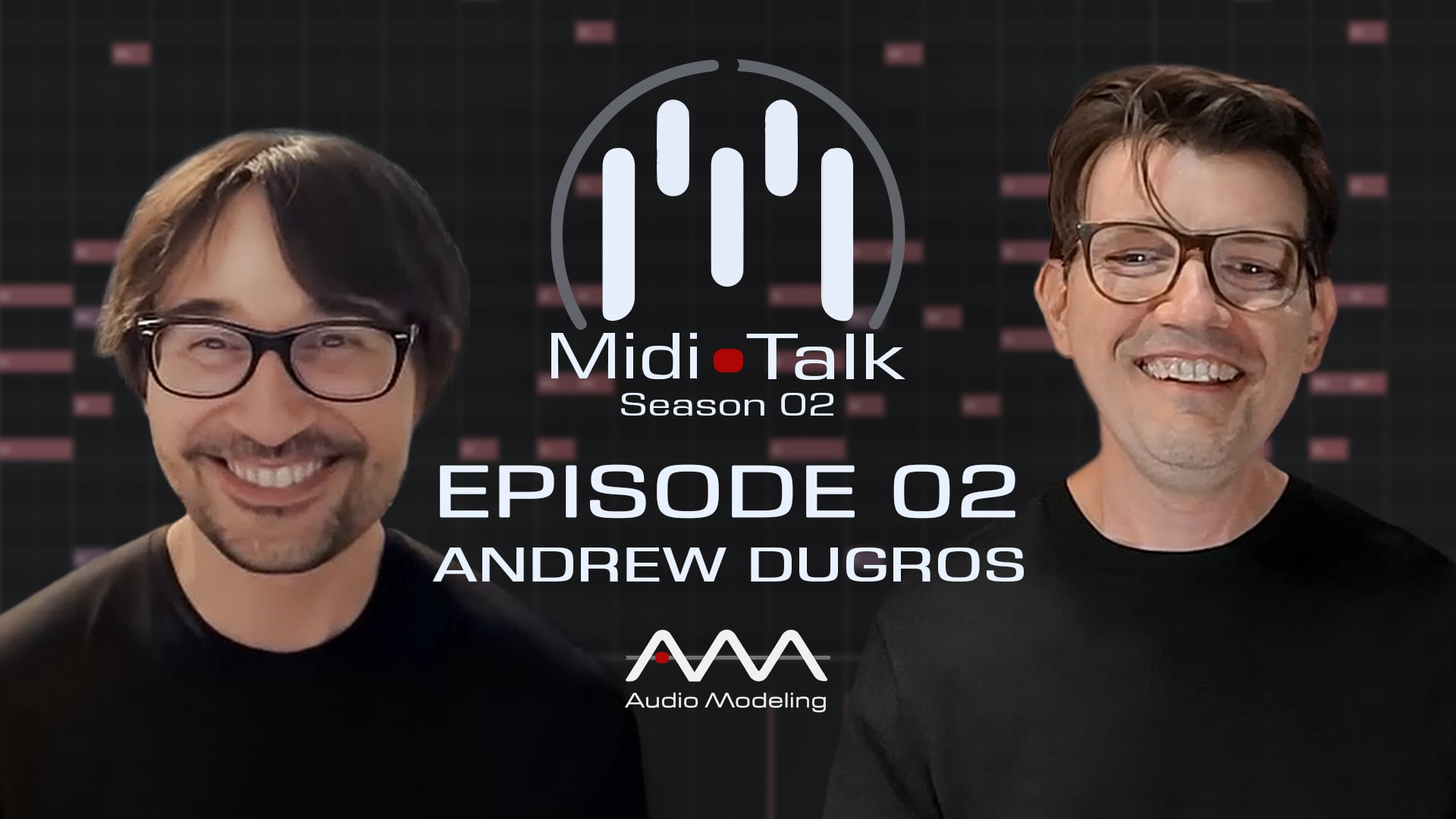 Andrew Dugros is a native-born Italian, but it would not be inaccurate to say that his first language is music. Having been born into a musical family, Dugros started learning music at the tender age of 6, when he began studying classical piano, often being taught by a cousin who has long been a music teacher.

Barely a year later, Dugros had his first encounter with music technology. “There was an electromechanical organ at my uncle’s home,” recalls Dugros. “When I went to this instrument and was able to change its sound (with the drawbars), that was the moment when I decided that technology and music was unique work. The (role) of technology in music is very important for me.”

Dugros got his first electronic instrument, a Yamaha Portasound keyboard, before he was even a teenager. “It was a little keyboard, but, for me, it was a big experience,” he smiles. In a common pattern for keyboardists, Dugros soon acquired another keyboard, and then another.

At age 15, Dugros’ journey into music technology took another major turn. “The big change was when I bought my first sequencer and learned MIDI. This day changed my life as a musician,” Dugros emphasizes. “When I was able to record a track with the keyboard, and then record many more tracks to create a song with MIDI, it was fantastic! Obviously, I continue to play the piano as my first instrument, but keyboards and synthesizers are very important in my life.”

The first years of the new millennium found Dugros digging in to all these areas by becoming a certified Cubase teacher, studying at Milan’s famed CPM Music Institute, founding AMM (a music and technology academy you can find at http://www.accademiamusicamodernaaosta.it/), and, finally, becoming an engineer at CPM and starting his own recording studio.

Beyond all of his studio work, Dugros has also maintained an active performing career across a broad range of musical genres, including jazz, pop, gospel (Dugros is also an accomplished vocalist, often singing lead), and folk. As if that were not enough challenge for him, Dugros also played solo piano concerts.

His studio work has similarly crossed genre barriers, producing more than 50 albums for artists in classical, pop, folk, and rock.

This broad range of experience taught Dugros key lessons about what the true priorities of a musician and composer should be. With acoustic instruments, the heart of mastering them is endless practicing of fundamentals. With software, that idea translates into having a good workflow.

“We are musicians, not programmers or engineers,” Dugros begins, “We want to play, we want to compose, we want to arrange. When the computer has a problem, this is a situation in which a musician is not happy. So the workflow with a computer is very important.”

During the years when Dugros was really coming of age in music production, the quantity of available musical tools, software and hardware, was exploding. Many musicians loaded their DAWs up with endlessly scrolling menus of software instruments, but Dugros realized that was not a viable path to true mastery.

“I have instruments from four or five, maybe six manufacturers. I’ve made all of my productions and my live shows using products from only these five or six developers, plus two or three other synthesizers. If I can use an instrument very well, I can make things that are impossible to think.

“Now, I am curious, so when I see a new product, I’m curious to see it and try it. On my YouTube channel, I try many products, but the number of products I use for real production is very restricted.”

The biggest reason Dugros is so concerned with having full control over his instruments is because he believes that is necessary to expressivity, which is his number one objective.

“This is one of the most important things in all of music, in everything that I do in the studio, in what I do in life, and in what I teach to my students.”

This emphasis on expressivity is what captivated Dugros when he first tried Audio Modeling’s modeled instruments, which enable expressivity through real-time control by modeling the behavior of acoustic instruments. “When I was younger, playing a saxophone sound from a keyboard was just a dream because the sound was very unnatural, very ridiculous in some cases. But when I played SWAM Saxophone for the first time, that dream became reality; I could realize the dream.”

But saying this brings Dugros right back to his argument for truly knowing your instrument in order to be able to get music out of it, because the true sound of each instrument is born largely from the idiomatic differences imposed by its physical mechanisms. “When you play a saxophone or an organ or an electric or acoustic piano, you play them in different ways. You can’t play every instrument in the same way, and expressivity changes with the sound that you use. You need to change finger position, for example, and you need to change your brain and think that you are that musician. When I play a saxophone or trumpet sound, I think like I am a saxophone or trumpet player. You need to change your mind and your technique, because (playing one of these other instruments) is not the same as simply having your fingers on a keyboard.”

While Dugros insists that both the instrument and one’s approach to it must be expressive, both of those are simply means to an end. In the final analysis, it is the approach to the music itself that determines expressivity, and that, says Dugros, comes down to immersion in the music and being in touch with your own musical voice.

“It is important to enter into the soul of the song. It’s not only about the current note or chord, you need to take your mind into the song. Expressivity is unique, so when you play a song, your version is different than any other version in the world because you are a unique person.”

Of course, this is true whether in the studio or performing live. “When you go on the stage, you’re not just a musician, you are saying something emotional. That’s one of the most important things a musician can do.”

When technology is mastered and under control, it can enable great expressivity in performance, but when things go awry, it can destroy the whole message the performer is trying to convey. Many performances today employing a lot of music technology are heavily mapped out and programmed, and Dugros feels that preparing well and then sticking with the plan is the key to everything turning out well in such situations.

It was this notion that caused Dugros to put Audio Modeling’s Camelot performance environment at the center of his performance system. “It is a great frustration when you have a big setup and go to play live. It is very difficult to play and change to the correct sound at the right moment in the song. I discovered that Camelot Pro is the solution for all of these problems, both live and in the studio.”

Certainly, there are always situations that force changes, and a performer needs to be prepared to “wing it” when necessary. Dugros remembered an incident where his guitarist suddenly had a problem, which he had to cover up by jumping into a solo, so you must always have one or two things you can grab on the fly, if needed.

That is not to say that Dugros doesn’t believe in improvisation, in fact, improvising is key to his compositional method. “When I compose, I start with an improvisation. I start to play, and an idea might be right for a song. So improvisation is very important.”

The last half-century has seen synthesizers and music technology take hold and then dominate nearly every genre of music and every situation in which music is produced or heard. In all that time, the determinant of technology’s success has rested on a musician’s ability to take sophisticated instruments requiring some degree of electronic or computer savvy and get sounds out of them that evoke feelings in people. Andrew Dugros has fully immersed himself in this effort, recognizing that the mysterious art of extracting human warmth from cold electron flows and digital bits is the real objective in working with music technology. And that can only be accomplished by diving deep and mastering the technology.

Andrew Dugros has learned well that, as the song says, “You gotta get into it if you wanna get out of it.”

The Biology of Camelot