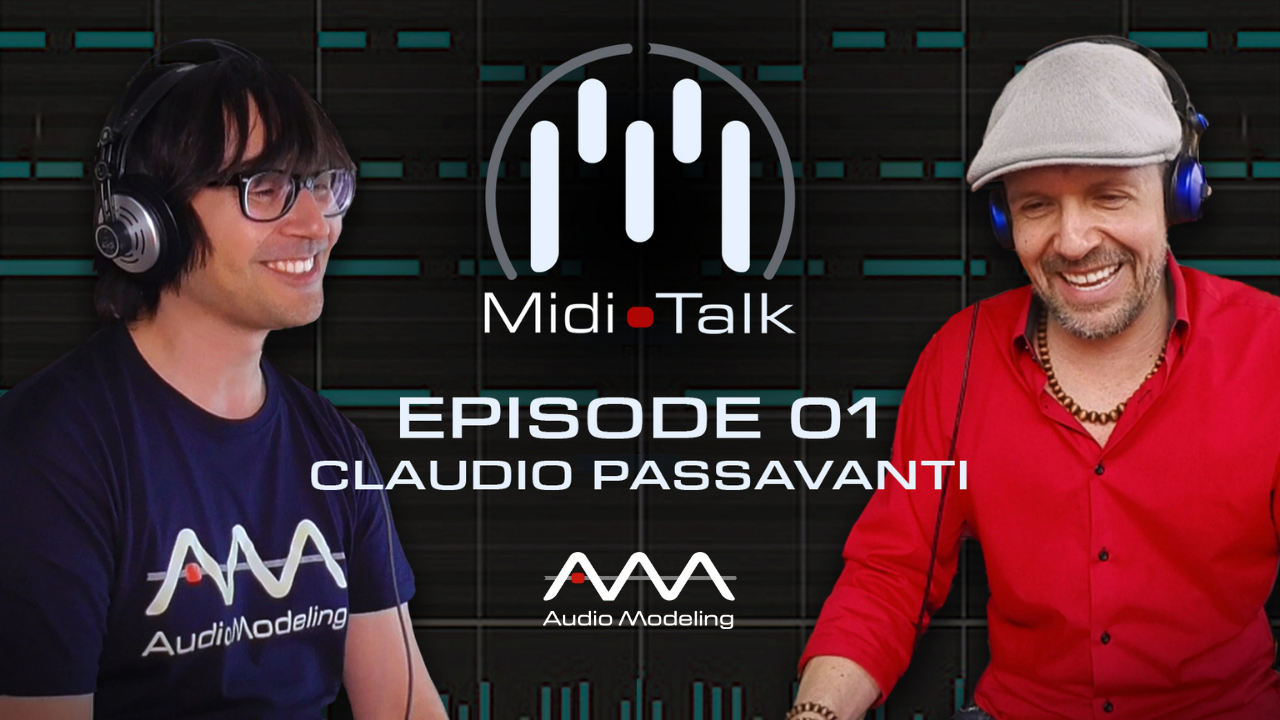 Thoughts on Succeeding in the Music Industry with Claudio Passavanti — MIDI Talk Ep. 1

MIDI Talk is a new podcast and video series about making music, music creation, and specifically the relationship between music and technology.

In this series, Simone Capitani, UX/UI designer of Camelot Pro and Marketing Expert for Audio Modeling, chats with creators, artists, technicians from all around the world to discuss their unique musical experience and what was the role of technology in their profession.

In his early twenties, Claudio moved to Los Angeles, California to study Orchestral Composing and Arranging at The Grove School Of Music.

Back in Italy after completing his studies and collaborating with many prestigious musicians in the L.A. music scene, he played keyboards, produced albums, and conducted orchestras for artists such as Zucchero, Lucio Dalla, Pino Daniele, Alex Britti, Niccolo’ Fabi, Gabin, Brian Adams (Italian leg of the tour), Ambra Angiolini, as well as many others.

“My interest in music started when I was really young. My mom says that apparently, already at the age of 3 I was playing with my brother’s melodica. Then, around the age of 8 or 9, I was already experimenting with record players. I think I was around 8 when I had my first ‘multi-track’ experience using my dad’s cassette tape recorder.”

“When I was a kid, I was always fascinated with computers”, explains Claudio. “I remember when I got my first computer, a Commodore 64, that’s what really got me started in technology.”

Clash of cultures leading to a unique sound

“In Italy, I hit a point in my career when I got tired of being put in this box of a pop musician. The music wasn’t fulfilling me anymore, I wanted to discover my own sound. So I moved to London when I turned 30.”

Claudio goes on to explain the difficulties of reinventing himself in a new country, one where he didn’t have the professional recognition he already had in Italy and where he had everything to learn.

“I remember going to jam sessions and feeling so out of place because I didn’t know the songs everyone else knew.”

There’s an incredible opportunity for growth and learning when someone is able to approach the unknown with humility, an open mind, and the drive to learn and work hard. Claudio shares how the musicians he met in the London music scene completely blew his mind because of their way of creating electronic music. By discovering new styles, genres, and producing techniques, he developed a very unique sound which he later became recognized for.

He became passionate about creating electronic music people would want to dance to and that became his inspiration to create Sunlightsquare.

Reminiscing on the challenges to adapt to a new culture and carve a place in a new industry brought up interesting and constructive thoughts around the topic of “making it” in the music business.

“Too many artists think that success comes from ‘being discovered’ when in fact, most success stories happen because someone put in the energy to put themselves out there, meet people, and learn from them.”

“One of the major keys to success is being able to listen to the needs of an industry, and then apply your knowledge to a different area so that you can create a unique combination, something truly ‘you’, that the industry wants and needs.”

The full episode of MIDI Talk with Claudio Passavanti is available as a podcast or as a video on our YouTube channel. Don’t forget to subscribe and hit the bell button to get notified of future episodes! Upcoming guests include Dom Sigalas, Martin Ivenson, and Peter Major.