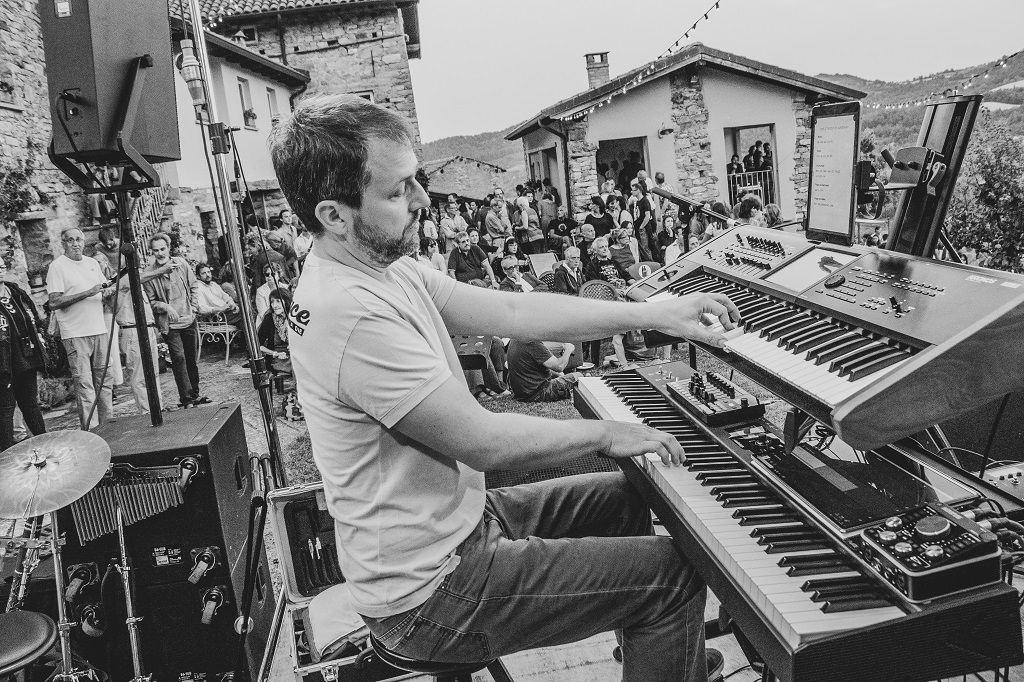 What are the needs of a keyboard player today? Probably one of the most important is being able to take advantage of all the available technology, without reading having to read many manuals or spending hours watching YouTube tutorials. Someone has chosen for setups entirely composed of virtual instruments but complains about the lack of a certain feeling and reliability during the execution.

Someone prefers to use only “real” hardware keyboards, but the cost is higher and  you miss the undoubted advantages of virtual instruments. Camelot Pro allows to get the best from both worlds, having them all sitting at the same round table, no matter who the manufacturer is or if they are hardware or software!

Camelot and other options

I joined the Camelot Pro beta testing program exactly one year ago. Camelot Pro is a software that already bodes very well from the premises. Last year I published an article about Camelot Pro in SM Strumenti Musicali (a renowned Italian magazine about musical instruments), which was born straight after the first impressions on such collaboration. At that time, I was using NI Kore 2 (now discontinued) on stage and had recommended the most recent Cantabile and Mainstage to many friends. My cover band live performances require many sounds that replicate with accuracy the original records. But having three or four keyboards would have made my setup difficult to carry and inconvenient to use.

Hardware or software?
The eternal dilemma!

Playing only virtual instruments allows to comfortably present oneself on stage or in the rehearsal room with a simple laptop, a couple of master keyboards and a few cables. I can instantly recall all the sounds I want at track change with just one click. However, this solution has never given me the same satisfaction as playing real instruments. Furthermore, acting on a laptop is not the maximum immediacy in case of emergency or tweaking during the live. I had assigned the main parameters to some sliders and potentiometers of my master keyboards, but some operations always required acting on the Host GUI. NI Kore had the convenience of having a hardware interface replicated in software that increased its usability. Returning to “real” keyboards would have meant accepting compromises on the available timbres, weight and losing Total Recall.

The transition to Camelot

One of the first Camelot features that blew my mind is the ability to manage a keyboard like a virtual instrument. Moreover, its native graphic interface for touchscreens is like a big display of a workstation from which I can control everything, including virtual instruments, without a mouse. It’s as easy and intuitive as programming a keyboard. Camelot is so simple that in the beginning you get the impression that it is limited to a few functions. Instead, there is everything you need! So I started reprogramming the whole repertoire of one of my bands on Camelot. The operation was long, but quite simple: with just a few clicks and thanks to the Template feature, layers are created in which to insert virtual instruments or so-called hardware instruments “maps”, which are sort of drivers that command a keyboard or an expander. 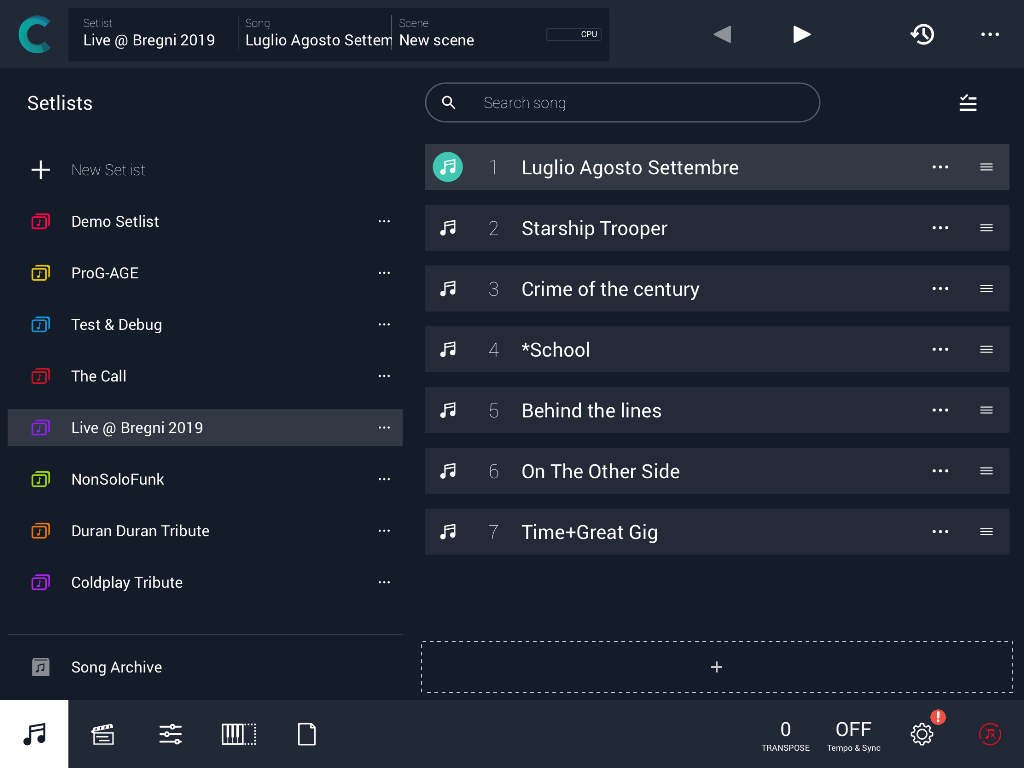 Through a hardware instrument map I can browse preset lists of my keyboards. Clicking on it, Camelot recalls that preset. In the past, I had to take the manual, read the commands to send and enter them manually. Which I’ve never done, because it was faster to type in the preset number on my keyboard. This is definitely not the best choice, especially if you have three or more keyboards and if you need to change sounds quickly during a medley. A Map can also change the mode of the machine from Performance / Combi to Program / Preset. For those who know the Kronos Set List Mode or the Montage / MODX Live Set, this is practically the same thing, but extended to all our machines, virtual and “real” ones. 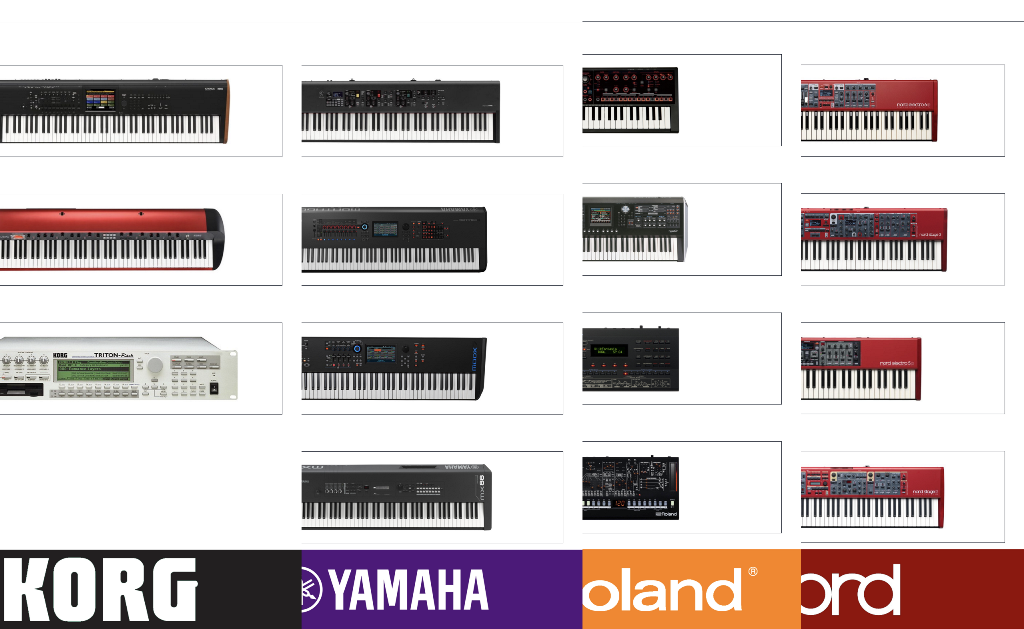 The list of maps is constantly expanding. For models not yet supported, custom maps can be created

What if I have saved User sounds on my keyboard or have I uploaded personal libraries? No problem: Camelot is able to connect to the keyboard and download the names of personal sounds via the exclusive system. Inside the maps there are also some faders that allow you to modify the parameters, such as the volumes of the parts of a performance, or some summary parameters via Control Change. Parameters that vary from instrument to instrument. Because in Camelot every tool has its own dedicated map. 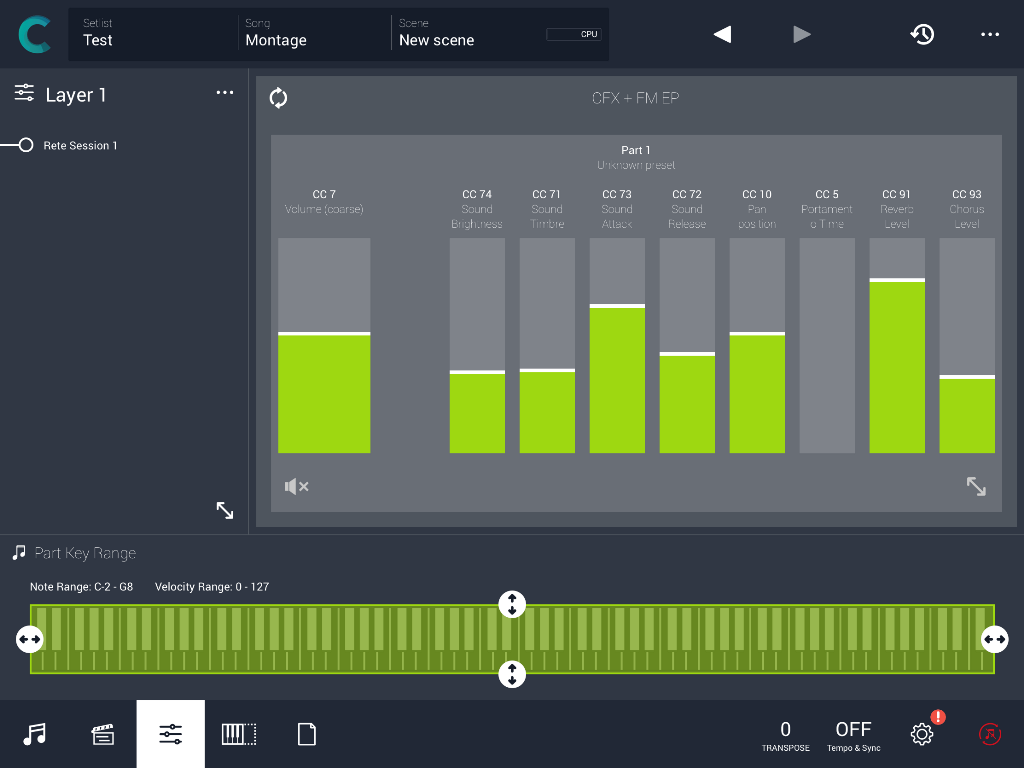 Opening a Layer, you enter the modification of some parameters, in this case of a Montage Part

Camelot features a very simple function, essential in my opinion: you can upload scores or personal notes in PDF format. Before using Camelot, my notes were written on paper or in Kore’s Notes window. Both solutions were not perfect, so I began to use an iPad on which I displayed scores or scans of my notes. Camelot allows you to import standard PDF documents and match them with a Song or a Scene, also selecting which part of the PDF to show. In this way, the focus on the PDF changes as you play your piece, Scene after Scene. If necessary, you can add annotations to highlight difficult passages or mark notes to apply corrections to  the PDF file when you get home. 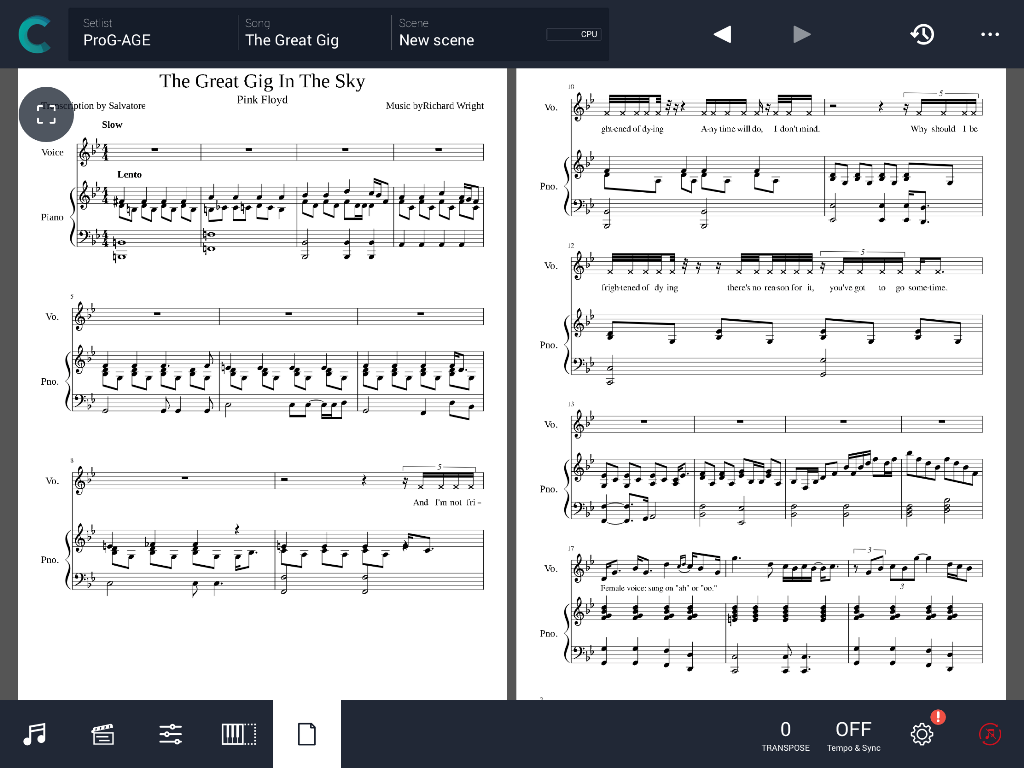 Camelot allows you to import standardPDF documents and match them with a Song or a Scene, also selecting which part of the PDF to show

All the created songs are stored in the archive. There, you can build the setlist or the repertoires. Playing with different bands, for example, I created various playlists with the entire repertoire. Based on performance, you can create specific setlist very quickly and easily. Once the Songs are added to a setlist, I use a normal pedal switch to move from one another. If necessary, you can also use a double pedal, to move backwards in a setlist. And what about the Scenes? I personally use them for two purposes. The first is to differentiate the setting of the instruments within the structure of the piece: e.g. activating and deactivating instruments, modifying the relative level between verse and chorus, acting on the split points, transpose and other parameters. The second use is to quickly change between tracks in a medley. The change is immediate and uses, for those who have them, the technologies of transition from one sound to another without interruption. 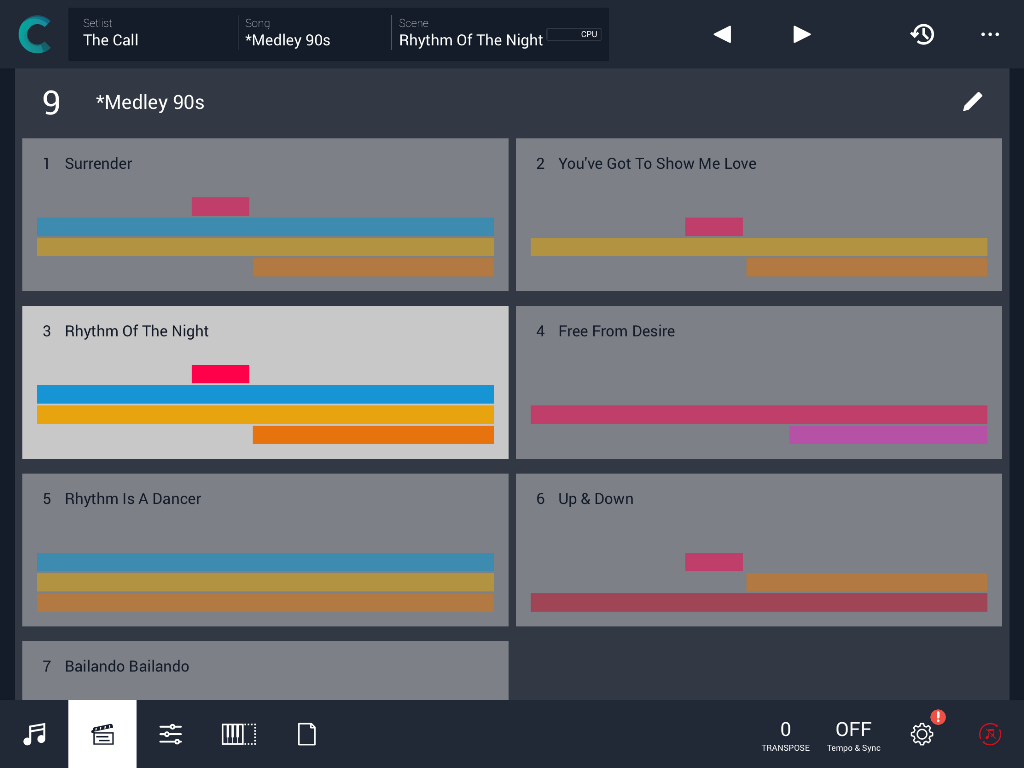 A complex medley with several scenes

In Camelot, each Layer and each Item have a section that we could call “masterkeyboard”. Here you can filter certain MIDI commands, create layers, split, set semitone or octave transpose, connect MIDI IN and OUT as desired and perform routing of MIDI channels. Let’s better explain this feature with some examples.

Did you ever layer a piano with a pad? I guess millions of times. How annoying is the fact that sustain pedal also acts on the pad, mixing the sound? The (elementary!) solution is to enable the Control Change filter 64 within the item that contains the pad sound. I can filter any MIDI message, to satisfy every need. Obviously there is also transpose by semitones and octaves, global or for each Layer or Item. 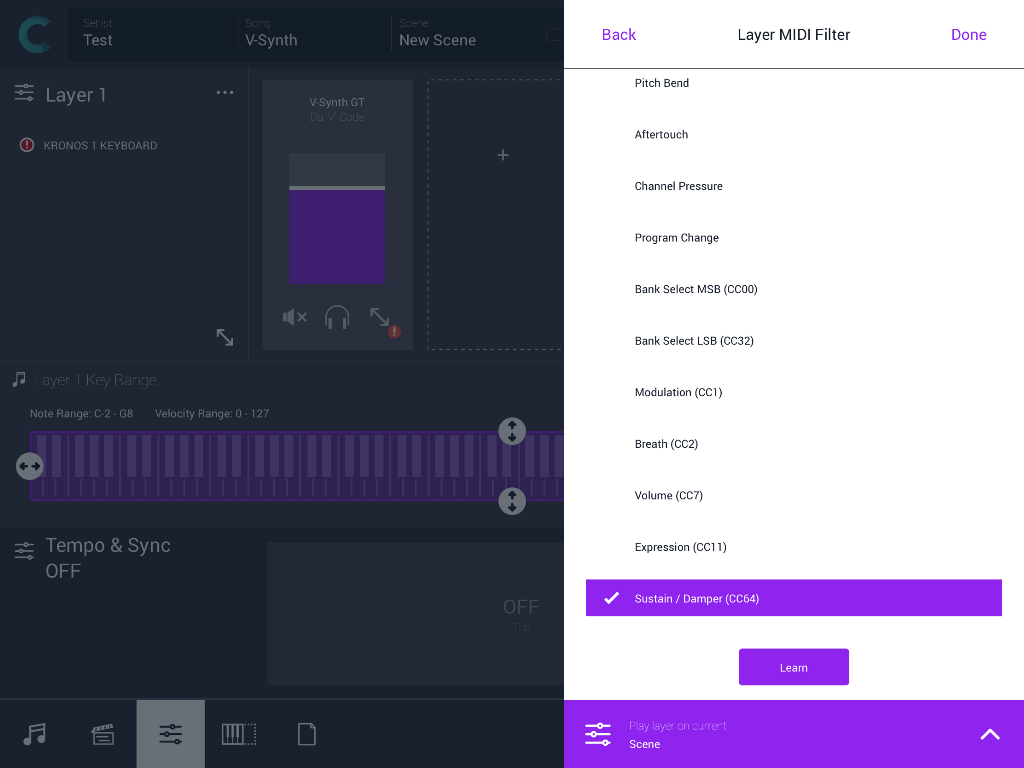 I can filter any MIDI message, to satisfy every need

All keyboards can communicate with Camelot by connecting via USB or via traditional 5-pole DIN ports or virtual ports. Camelot sorts all the messages generated by our keyboards or controllers, and can send them to a virtual instrument, or to the hardware tool we are playing, maybe after filtering or transposing a tone. Alternatively, you can send them to another keyboard instrument, because – this is my case – you have a weighted Master controller to control and play the piano sound generated by a synth, and you want to use the latter  (equipped with synth action keys), to play a virtual instrument or a connected expander. 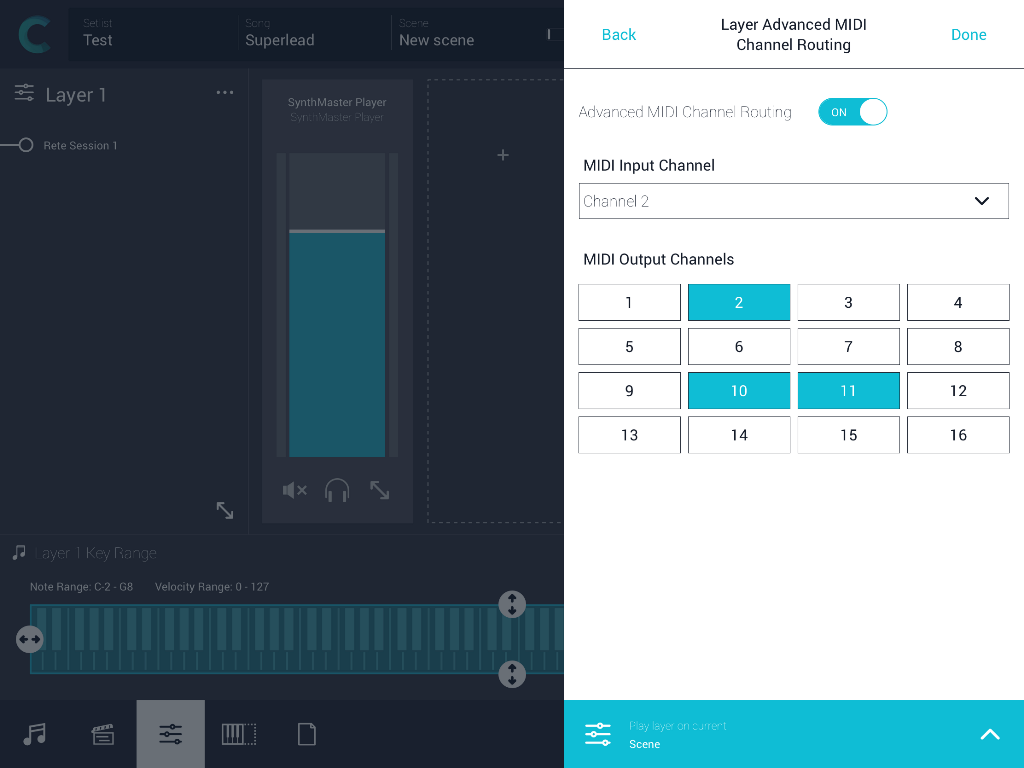 We can create as many layers as we want and assign a different sound generator to each one, to enrich a sound. Or we can open as many Items as we want within a layer and assign them to as many generators as our CPU can feed. In the Items, we can load maps of hardware and software instruments. Just use the “handles” on the keyboard, shown at the bottom of the window, to create split points. It is possible to layer more sounds at different Velocity levels, as well. This is a useful option for having Hammond and Mellotron in layers, enabling the latter to play only when the Velocity is above 100. This way, I can add it or not, by simply…playing. 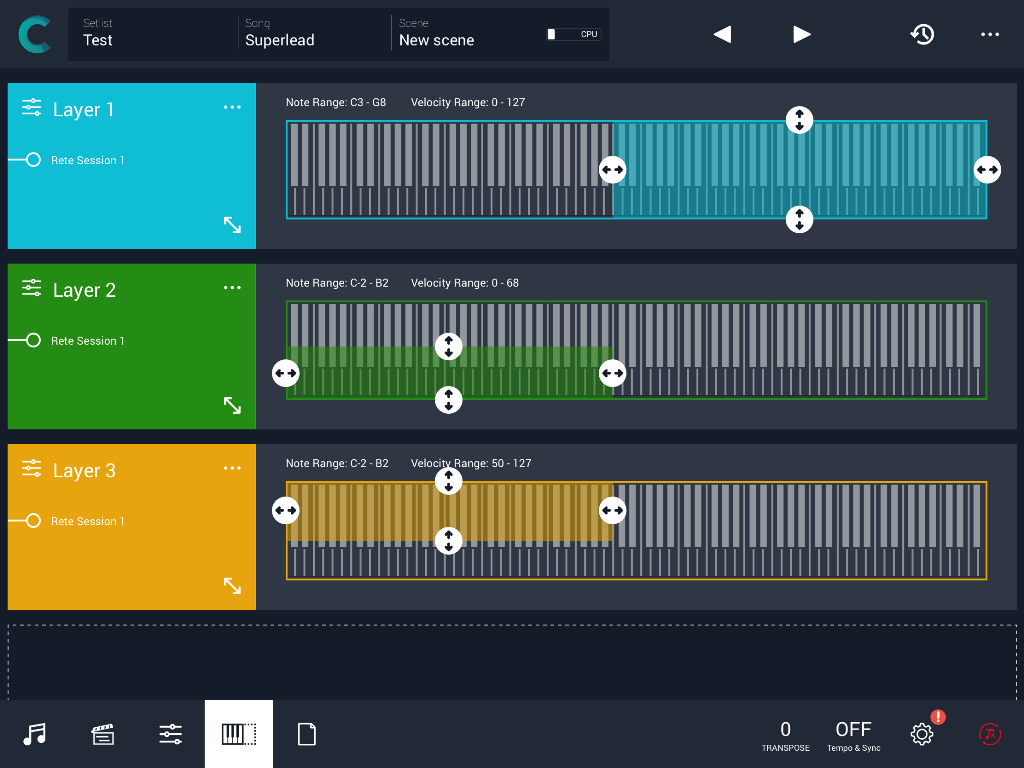 The Camelot community is continuously expanding thanks to the timely technical support of the AudioModeling team. Camelot begins to appear also on important stages: among these, the one of Vasco Rossi (one of the most loved Italian pop/rock artists), where all the setup by Alberto Rocchetti (Vasco’s historic keyboardist) was managed by Camelot, expertly programmed by Fabio Nuti (his keyboard tech). Not to mention Jordan Rudess, who took part to the early stages of Camelot Design supporting it personally. So far, we only talked about keyboard players. Nevertheless, other musicians can also rely on Camelot for the selection of presets, management of scores, singer’s multi-effect and in future also Backing Tracks. Even my drummer is interested, because Camelot allows him to manage the metronome tempo changes within the medleys! That has been my experience so far, I warmly recommend to everyone to download the free version for Mac and Windows and sit down at the Camelot round table! 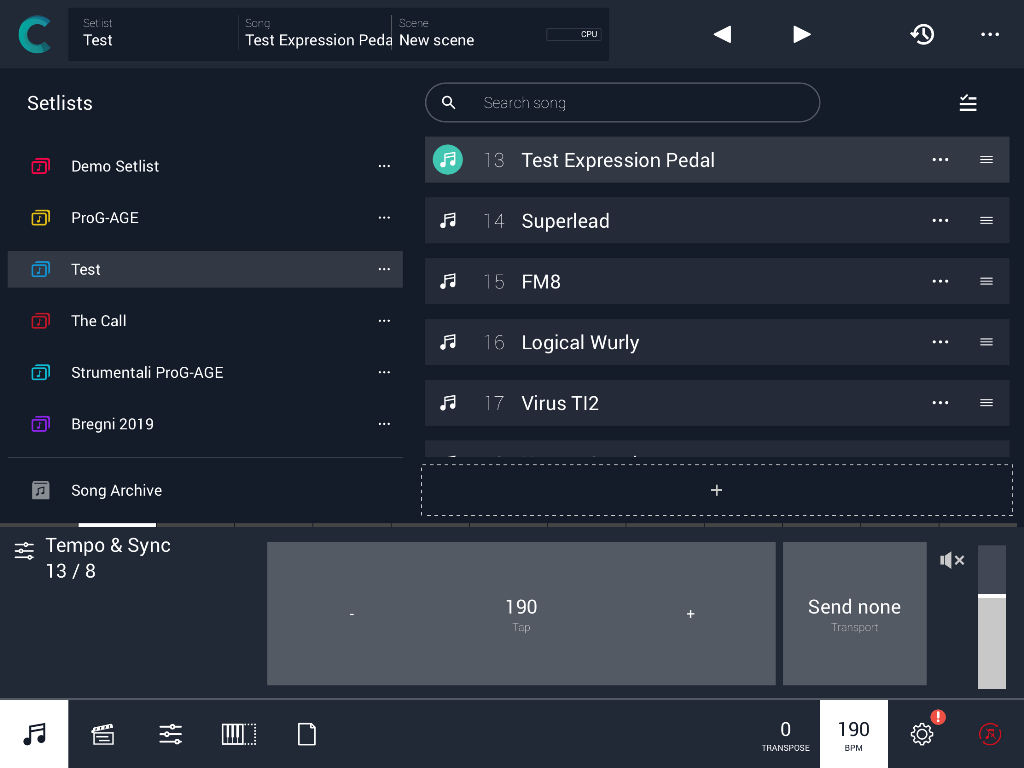 We can associate a metronome tempo to each Song and Scene, set it with Tap Tempo, synchronize it to an external application and send the audio click to a separate output dedicated to the drummer