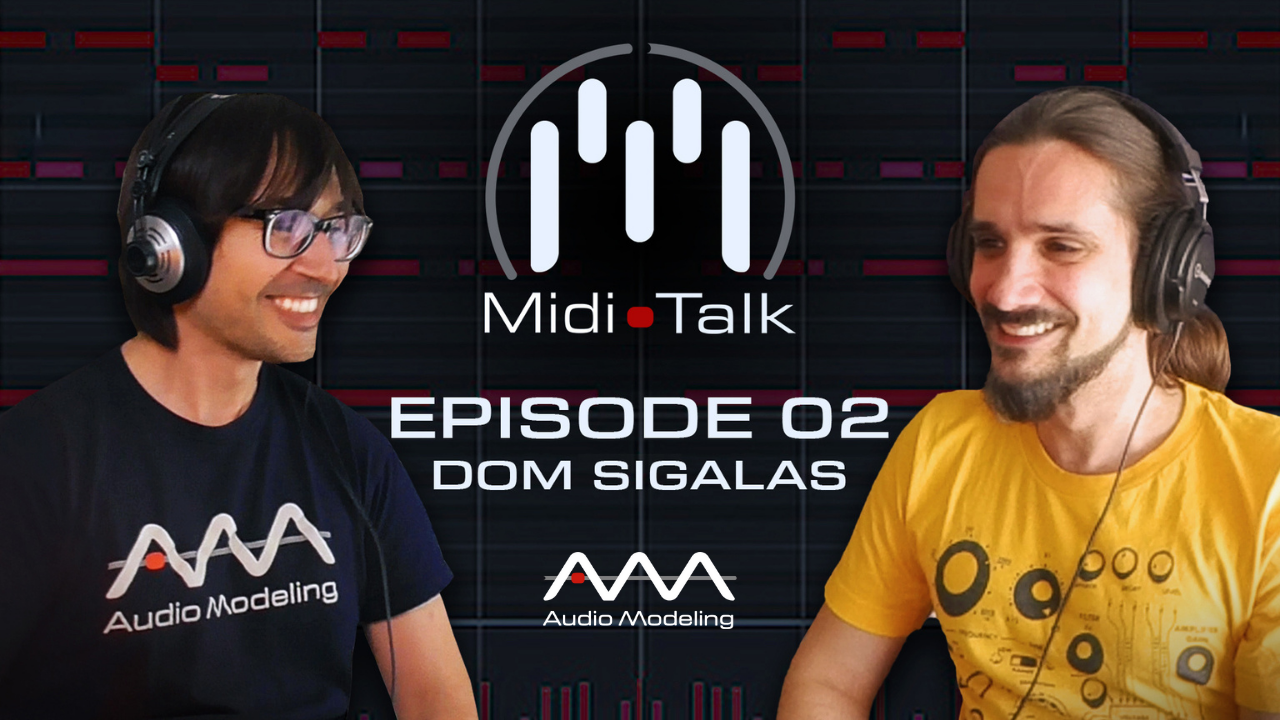 In this second episode of MIDI Talk, a series dedicated to meeting creators, artists, and technicians from all around the world to discuss their unique musical experience and the role of technology in their profession, Simone Capitani met with music producer and composer Dom Sigalas.

Classically trained as a pianist from a young age, Dom is now based in London, UK, has been a professional producer, mixing and mastering engineer for several top-level studios as well as working as a sound designer for well-established audio technology companies. From film music to advertising to developing sounds and presets, Dom’s musical experience is diverse and covers a wide range of skills and technologies related to music.

“The reason why I got into music and stopped watching sports is that I felt music was something that brought people together instead of making them fight with each other.”

“I used to be a huge football fan. I watched the games, cheered for my team, was happy when we won and angry when we lost. With my friends, we fed on this energy of competition. Music doesn’t do that. Now, if I meet someone who plays different kinds of music than me, I’m curious to know what their process is.”

It’s true that differences between musicians and artists can be a great way to connect and learn new things, but they can also create all kinds of friction between people from different musical backgrounds.

“I was with friends talking about different harmony approaches — the different approaches between jazz and classical for example — and how we hear music in our heads. Because we’re all open-minded and curious, we learned a lot from each other from this conversation. But sometimes, there are ‘camps’ forming, for example, the traditional musicians vs the tech guys.”

“Many people have to face a lot of music snobs out there. I’ve seen it. Some people don’t know how to play an instrument very well but they can create amazing stuff. Sometimes, these people are even more creative than musicians who understand music in a traditional way. But unfortunately, a lot of times one type of musician is afraid of the other. The one who doesn’t know how to play is afraid of the skills of the player, and the players are intimidated by people who are amazing creators without knowing music in a traditional way.”

“I think the people using stuff like modular synths or other technological means to create music would become better musicians if they also knew a minimum about music theory. On the other hand, traditional musicians would gain a lot by embracing the possibilities technology brings to the table.”

“This snobbism is also present in music education. I visited many schools and sometimes, there’s a bit of a problem with the way teachers approach technology. When I was a student in University, many traditional professors frowned upon people going into music and technology because to them, that’s not real ‘academic’ material. They would say things like ‘oh yeah, you’re going with the buttons and knobs and stuff’ as if this meant taking some kind of shortcut.”

“Now, when I visit schools, I always say to students ‘look, you can go on and not use computers or tech. But if you want to get into the music industry, you’ll find it much easier to know all this stuff.’ Kids and young people should know about all the possibilities that exist out there because that’s what gets them excited. I remember the first time I tried out presets on instruments when I was younger. I remember thinking ‘there’s no way I’ll be able to create a preset!’. And now here I am, loving sound design and creating presets for big companies.”

Workflow of a Diverse Music Producer

“One of the great things about working in music is how diverse the work is. Even working on a different piece of music makes the day different from the previous one.”

Even though every day has the same start. “On a normal day, I get to the studio, turn on the equipment, and check what needs to get done.”

“Sometimes, I need to produce specific lines or replicate something the client wants me to replicate. Other times, clients send just the vocals and my task is to create the song — the chords, arrangement, drums, everything. Sometimes, they want a very specific sound, for example, a sound they heard on a hit record. That’s when I wear my sound designer hat.”

“When composing, I tend to work differently if I’m working on my own music or if I’m working for a client. For a client, my goal is to do the job to the best of my abilities and as fast as I can. For my music, I don’t have this time pressure so I take the time I need to explore and experiment with more ideas. It’s a very different mindset.”

“My setup is hybrid. I have synths, sample instruments, and of course SWAM instruments. When I first saw the SWAM Violin and SWAM Brass, I was completely blown away. SWAM blends really well with orchestral sample libraries. It’s one of these things that can add this extra realism, that missing ingredient. I know very few libraries that can do solo instruments well.

Instant Gratification and the Value of Good Musicians

“I got interested in music education because I was passionate about passing on the correct information to people getting into digital music. But at the same time, what I noticed is that sometimes, people ask the most obvious questions because they’re not used to do their own research and putting in the work.”

“We are in the age of instant gratification — we take our phones, download an app and everything is ready… But because we didn’t really have to work for it, we don’t open the app again. I think good musicians are even more valuable now because they had to fight this tendency for instant gratification everyone is looking for nowadays. Learning an instrument is hard work and takes practice. Fewer people are willing to put in the time needed these days I think.”

This episode of MIDI Talk with Dom Sigalas is available as a podcast or as a video on our YouTube channel. Don’t forget to subscribe and hit the bell button to get notified of future episodes! Upcoming guests include Martin Ivenson aka Atjazz, and Peter Major aka OPOLOPO.