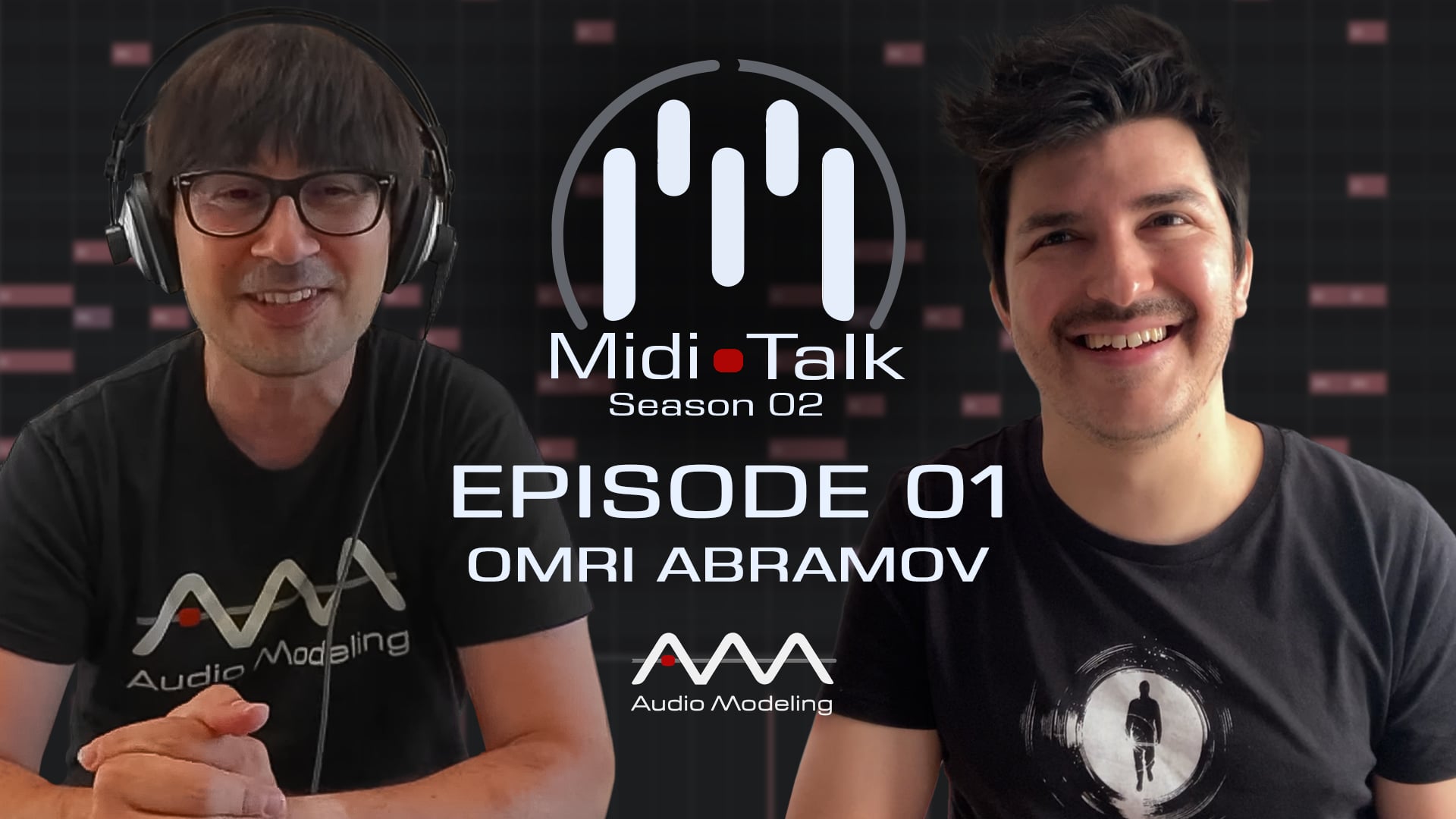 Omri Abramov (https://abramovmusic.com/) is a musician of his times: global in scope, drawing on tradition and breaking new ground, playing acoustic instruments and exploring the boundless possibilities of technology, and all in the service of his expression of the human experience.

Abramov studied jazz at Tel Aviv’s Israel Conservatory of Music and made tenor saxophone his primary instrument. Receiving designation as an Outstanding Musician from the Israel Defense Forces, he spent his time in the military playing shows all over Israel, including multiple appearances at the Tel Aviv and Red Sea Jazz Festivals.

Since being discharged, Abramov has played in the Idan Raichel Project, co-founded jazz-fusion band Niogi with keyboardist Dr. Guy Shkolnik, relocated to Berlin for better access to Europe’s jazz community, joined Sistanaglia (an ethnic/jazz group of Israeli and Iranian musicians with a message of peace), and formed Hovercraft, a New York City-based trio. Add in composing and producing, and Omri Abramov is a pretty busy dude.

Today, Abramov plays a lot of tenor and soprano saxophone, but also has taken a deep dive into electronic wind instruments, playing both the Akai EWI (Electronic Wind Instrument – https://www.akaipro.com/products/ewi-series) and Aodyo Sylphyo (https://www.aodyo.com/?langue=en). Few outside of wind players are familiar with these instruments.

“(Wind controllers) deal with electronic signals, but have this humanizing effect produced through a sensor that is based on breath,” explains Abramov. “This sensor is converted to MIDI data, like expression (controller). You can assign this to different MIDI parameters and humanize virtual instruments or analog synthesizers, or whatever you would like to control.”

When asked which is his favorite between tenor sax, soprano sax, EWI, and Sylphyo, Abramov glances skyward as he ponders the question. After a moment, he realizes the reason for his hesitation. “I don’t have a favorite instrument,” he begins, “because everything is connected to what (the instrument’s) functionality is in a specific situation.” Further, the experience of playing each instrument impacts his playing on the others. “The saxophone playing benefits my playing on the EWI and vice versa. They all contribute to reaching my vision.”

“My relationship with technology started about 13 years ago, in my old jazz fusion band, Niogi,” says Abramov. “That’s where I got into sound synthesis through playing the EWI, getting a bit out of the traditional acoustic zone that I was in.

“I started doing music of my own in the line of fusion and sound design, and thought, ‘I’m playing all that uptempo jazz on my sax, it will be easy: I’ll just go to the store and pick up the EWI and start shredding.’ And I couldn’t play a note because it was so different. Still, I was brave enough to get one home, sit with it and practice a lot.

“I got a MacBook and a version of Apple Logic, and the first synthesizer I used was the ES-2 that came with Logic. Then I went to Spectrasonics Omnisphere, and explored sound design combinations with samples and stuff. I’ve also worked in the area of plugin development, like my connection with Audio Modeling, and with Aodyo, the manufacturer of the Sylphyo.

Drawing Expressivity Out of Technology

Having spent years studying playing techniques on saxophone and learning how to employ them expressively, Abramov is essentially repeating that journey with electronic instruments.

“There’s definitely (challenges in technology) I had to find a way around. For example, vibrato. There’s a great vibrato response in the parameters on the SWAM instruments, and on the EWI, you can get vibrato through biting the mouthpiece. I tried that a bit and ruined a few mouthpieces because my bite is apparently too strong. I started using pitch bend, and it felt more like a natural response. The EWI has a pitch bend up on the upper side of the thumb and pitch bend down on the bottom side. I use many upward pitch bends, and I do it with my thumb. Naturally searching for that feeling from the sax, I found this thing and it started to be part of my playing.

“Maybe that is something personal to myself, I found my way to do it. Many EWI players ask me, ‘oh, you actually use the thumb to do vibrato?’ Yeah, but it’s a tiny thing, because if you do it too much, it’s like oowahoowahoowah. But that’s the beauty of music: you search for this feeling, you suddenly create this thing that maybe if you were coming from the outside and tried to analyze it like a computer, you’d be like, “ah, no, that’s not the way to do it,” but then you put a person in this process trying to reach for something from the heart, and it creates something.”

The other example Abramov cites is the importance of dialing in the velocity response of the sound source, which is an iterative process involving small adjustments on the software instrument, then adjustments to the controller, and back and forth until it feels natural to play. ”It’s not really like I look for what resembles the saxophone, because if I play a trumpet sound, or more than that, a synth combined with a trumpet sound, that’s a new thing. I’m just looking for how it will have a soul, how it will have a character that you can hear someone behind it playing it like it was something natural in the room.

“What we’re trying to do is give technology and electronic instruments and software instruments the human element that keeps them so exciting for years without becoming dated. Acoustic instruments are never getting old. Synths, usually the ones that are flashy and super hip right now, in 20 years will not be hip at all, because fashions change. But things that are more subtle and grounded, that have soul inside and feel more natural–it is more likely they will endure the test of time.

Abramov discovered Audio Modeling’s SWAM instruments at a couple of NAMM (National Association of Music Merchants) trade shows. “The first time was at NAMM 2019,” Abramov recounts. “ I connected my EWI to one of the SWAM instruments, and was blown away. Before that, I was doing stuff that was more connected to the internal EWI sounds. But then I used the EWI as a controller for this amazing SWAM sound engine, and I was really intrigued. To be frank, it changed my views about virtual instruments and what you can do with modeling synthesis to emulate an actual instrument.

“Even now, I love taking several SWAM instruments and combining them together to make new sounds. These possibilities hit me right away. I asked, ‘Can I combine this clarinet sound with the flute sound that you just played?’ And (the Audio Modeling person) said, ‘Sure,’ and then he set up two sound engines and put the sounds together, and it was so fun to play with that I was hooked. There’s one big video called SWAMMED (https://www.youtube.com/watch?v=OocavJfNiv0) where I did an orchestra of wind instruments. It was a whole process. I was diving more and more deeply into it. “

Abramov’s interest in Camelot had just as much impact on him. “Camelot is really inviting, that would be the word for it. It’s not messy,” asserts Abramov. “The most crucial things, like volume control, are really easy to approach in Camelot. I can create all my sound combinations and give them different effects, run them through different processing–even use different controllers–see the level of each of those layers (containing the various instruments) and what processors they are running through. Perhaps 50 percent of my time is spent creating those combinations, that’s a lot. Camelot became my go-to for that purpose. My iPad works hard, and Camelot works hard.”

Abramov’s attention to features that aid his ability to play expressively has led him to focus heavily in Camelot on one thing: the response curves that translate controller response into sound source parameter response. Camelot provides powerful tools for shaping these curves to match the style of a player or the characteristics of a controller to the way that a sound changes. “I use the SWAM MIDI Learn function to assign different parameters, then I modify the curves,” he details.

“I use that for things like opening a filter. If I rotate the Sylphyo one way or the other, it opens the filter in different ways. What I like to do is apply just a bit of filtering; even on SWAM Trumpet, I’ll put an external filter on it. The filter is not 100 percent open, but almost, and every small movement I do opens it a little bit. It’s like I’m trying to emulate the feeling of what happens when the trumpeter is moving his head and changes the angle of the lip.

“It’s a territory I’ve started to explore relatively recently, but I feel like there’s a lot there, because I didn’t realize how much expressivity happens from the actual movement of the player. I mean the small gestures you do when you’re excited or you move for a higher or lower register. The aspect of movement is one thing I think Aodyo did great in the Sylphyo, with its movement sensor. When you approach it in a delicate way, the small gestures in the curves, in the volume combinations between layers, in the movement, that is where the magic is. I can spend hours on that.”

Omri Abramov has his nimble fingers into many musical pies, but while maintaining his deep love of the saxophone, he is clearly transfixed by the unexplored territory that music technology lays before him. He still views himself as being barely past the starting line.

“All this is a constant search for new ways of expressing myself through technology. Of course music is the engine, but technology is the tool. This is a constant journey since (starting with the EWI). I’m trying to get deeper and deeper. I feel like I’m just scratching the surface.”